We get it, world! Skrillex is a popular guy! 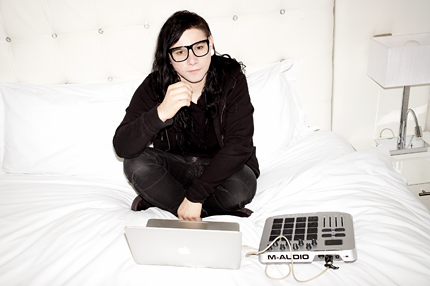 We get it, world! Skrillex is a popular guy! He won three Grammys Sunday night. He’s been on magazine covers (like this one, hey-o!). He’s literally rocked a boat. But as of this week, interest in Sonny Moore’s personal life is at an all-time high:

Us Weekly broke the news that the dubstep hero is dating 25-year-old U.K. pop singer Ellie Goulding. “It’s a really cool new romance and they get along perfectly,” a source tells the magazine. “They’re really good together. Everybody thinks it’s awesome. Both of them are so talented. It’s a great L.A. romance for her now that she hasn’t been in London.” To be clear this is Us Weekly. The magazine known best for its wall-to-wall Kardashian coverage.

And now Buzzfeed has posted 60 photos of Skrillex… before he was “Skrillex,” which is basically many, many pictures of From First to Last. The same thing happened to new Knicks’ sensation Jeremy Lin this week. Welcome to the big time, guys!