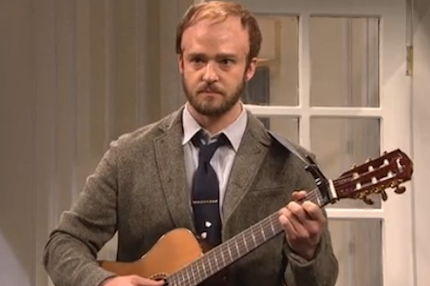 Saturday Night Live’s musical guests have been wildly veering between big rock acts (Coldplay), pop stars (Robyn), budding chanteuses (Lana Del Rey), indie folk heroes (Bon Iver), and Internet curiosities (Karmin). This past weekend the show steadied the ship with Sleigh Bells, who conveniently happen to be on our new cover! Derek Miller brought his nicest camo Jackson guitar for the occasion, and Alexis Krauss showed off her expert hair flipping in front of the band’s signature wall of Marshall stacks. It was loud. It was poppy. It was the best thing that could have happened after last week’s Karmin debacle (2/12/20, never forget). Watch “Comeback Kid” and “End of the Line”:

The SNL crew seemed energized by the return of former castmate Maya Rudolph as host, who chatted with very frequent guest Paul Simon during her monologue, winked at Justin Timberlake during “Bronx Beat,” and dissed Ke$ha during a skit exploring what it would take for Obama to lose her vote (“I would be very upset if Barack is with that busted up white girl”). But the strongest sketch by far saw a host of musicians visiting Blue Ivy Carter at Jay-Z and Beyoncé’s Scarsdale home — Prince (a smirking Fred Armisen), LL Cool J (Kenan Thompson in his “formal Kangol”), Taylor Swift (a very shocked Kristin Wiig in a flowing white dress), Nicki Minaj (Nasim Pedrad sporting a pink wig and her best crazy eyes), and Bon Iver (a bearded Justin Timberlake who proclaimed, “Sorry I’m late, whatever, umm, I was just wandering barefoot in the woods of Wisconsin, fashioned this guitar out of a canoe and I wrote a song for your baby.” Perhaps anticipating the blog blowback over his impersonation of the gentle Justin Vernon, JT held up a sign reading “I [Heart] Bon Iver” over the closing credits. Maybe these two can get together and have a falsetto-off?