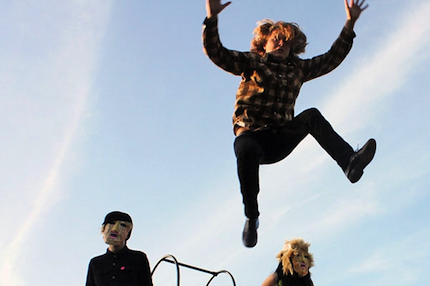 “What I will say,” Ty Segall whispers, “is that I still smell like meat.”

Here, Segall took on drum and rhythm guitar duty while Presley contributed bass and lead guitar lines that seem to have left Segall breathless. Presley, he explains, is a “total ripper.” “We’d like to bring the guitar solo back to rock’n’roll,” he laughs. “It seems like it’s been gone for a while.” Due in late April by way of Segall’s current label home, Drag City, Hair will also bring with it a tour that allows for sets from each of their three outfits, with Segall headlining at the end of the night.

Much of the guitar interplay between the two, Segall says, has seeped into his solo work, as well. The Californian is currently knee-deep in the recording of his next solo full-length, with eight songs already completed. “It seems like every album I make has its own distinct feeling,” he says of the record, due to drop tentatively in September, following an additional live release. “Right now, this one just sounds really fast and hard and aggressive.”