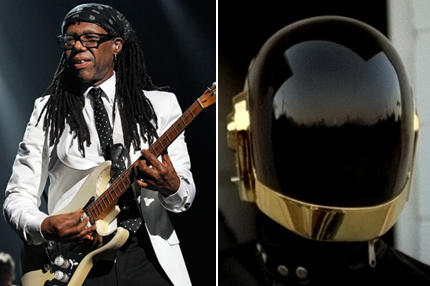 The godfathers of contemporary electronic dance music appear to be working on their next album with one of the godfathers of dance music’s original American chart takeover. On Monday, Houston’s Culture Map reported that Chic guitarist Nile Rodgers, who gave disco a healthy jolt of funk before going on to produce such albums as David Bowie’s Let’s Dance and Madonna’s Like a Virgin, would be meeting with Daft Punk about the French duo’s upcoming fourth album. And now Rogers has reportedly confirmed the collaboration, which is potentially awesome news for anyone with ears and/or asses.

Australia’s Faster Louder spoke with Rodgers on the occasion of Chic’s impending Australian tour. Daft Punk’s Guy-Manuel de Homem-Christo and Thomas Bangalter had just been at his place, according to Rodgers. “We were just jamming at my house, but it’s gonna be proper and real,” he’s quoted as saying. “They came over to my today around breakfast time and it’s now evening I basically had to almost kick them out. We were having so much fun just in an informal setting that we decided to make it formal. And it’s very formal. It’s gonna be amazing.”

Rodgers and Daft Punk have known each other for a long time, but never closely, he went on. “So today was the first chance we had to spend hours and hours together and it was just so awesome,” he told Faster Louder. “Every track they played I just ran across the room and got my guitar and started playing and we were all dancing around my dining room having the time of our lives. It was something that was meant to be. It was interesting how Thomas said to me: ‘It’s funny Nile, it’s like we’ve completed the circle.’ ” Any circle that involves Daft Punk dancing around a room with Nile Rodgers is a circle that must be completed.

Below, here are several of Rodgers’ best-known collaborations, including one or two that might be relatively unexpected to those not already familiar (“Love Shack”?!):