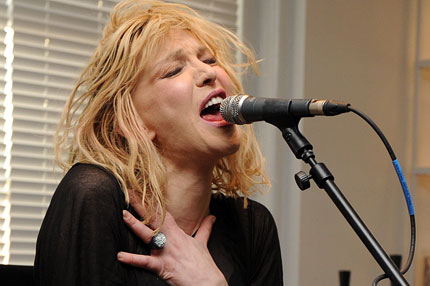 A little over a year ago, Courtney Love made history by becoming the first person to be sued regarding comments she made on Twitter when designer Dawn Simorangkir complained the singer depicted her as a thieving, drug-addled prostitute with violent tendencies on her old @CourtneyLover79 account. Last March, Love paid Simorangkir a $430,000 settlement, which, on top of lawyers’ fees, is not chump change.

Speaking of lawyers, a member of what we can only assume is Love’s ample squadron of litigators is now suing the singer for Twitter defamation. According to the Hollywood Reporter, Rhonda Holmes and her firm are accusing Love of libel due to June 2010 tweets that include, “I was fucking devestated when Rhonda J Holmes esq of San Diego was bought off. I’ve been hiring and firing lawyers to help me with this.”

THR reports Love’s current legal rep, a brave soul named Michael Niborski from Pryor Cashman, is arguing Love didn’t expressly mean Holmes had been bought off. “Obviously, the phrase ‘they got to her’… can mean many different things,” he wrote. “For example, it more plausibly means ‘they irritated her’ or ‘they wore her down’ or ‘they reasoned with her.’ It does not necessarily mean ‘they bribed her into ceasing her legal representation of Courtney Love.” He added, Who are ‘they’? Who is ‘her?’ ” Who are any of us, Michael.

Niborski may have you convinced Love was being totally vague, but a Los Angeles judge disagreed at a hearing yesterday, ruling that the tweet, “May be reasonably interpreted by the average reader as a statement of fact.” THR says that means Love is likely heading to a jury trial.

In related news, Love has denied reports that she committed cat-i-cide and caused the death of daughter Frances Bean’s kitty. “It was a mountain lion that killed Peabody!!” she reportedly tweeted, noting Peabody was her own pet.