'Chemical Brothers: Don't Think' is a haunting look at their Fuji Rock performance 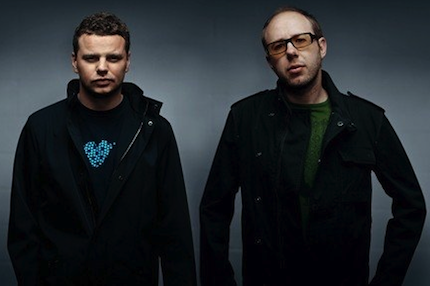 Wednesday night, moviegoers at 200 theaters in the U.S. will get a look at Chemical Brothers: Don’t Think, a documentary directed by the Chemical Brothers’ longtime visual collaborator Adam Smith that captures the massive chaos of the big beat duo’s live show — specifically, an appearance at Japan’s Fuji Rock festival through the lenses of 20 cameras amid 50,000 party-goers.

The music from this particular live set is fantastic, though that’s kind of a given. As for what’s captured onscreen during the 80-minute ride through strobe-lit delirium, the truly great moments are found when you look past Smith’s trippy visuals and into the crowd, where you’ll spot pockets of people having very different reactions to the same bombardment of sound. And then there’s the nameless heroine whose strapped-on camera allows us to follow her as she dances, wanders through food stands, screams for no apparent reason, laughs at an unseen friends, and, at times, looks thoroughly terrified during her big night out. SPIN caught up with Chemical Brother Tom Rowlands to talk about the duo’s big-screen debut.

Is making a film of your live show something you’ve always wanted to do?
Yeah, it’s sort of something we wanted always to film and to be in control of the filming. We’ve seen so many different versions of [our shows]; the BBC filmed it, or you see festival footage from camera crews, or YouTubes. Sometimes it’s good, but you think, “How would it be if we controlled it?”

Adam Smith has been with you so long now that he seems like the third Chemical Brother at times. Can you describe your collaborative dynamic?
As we’re writing music or making an album, we’ll send Adam bits of songs as we’re working on them. Some things we’ll have a very clear idea. For one song we had a sound where it just kept going up and up and I always imagined a hand climbing up a ladder. It was a very specific idea. I mentioned that to Adam and he takes it away and made this into an amazing film. Or, in another way, he hears the music and he immediately thinks it should be paintballs exploding in space, or cutlery dropping through water. It’s always amazing for us. When he started out, all of the images in clubs were fractal and future-techno. He’s the opposite of that. He’d be scratching the actual film, just an approach where you feel like there’s actual humanity involved and not trying to be too slick.

The camera that’s strapped onto the girl for the duration of the show is key to humanizing the film. Was she a friend?
Part of our crew met her when we played Fuji Rock five or six years ago. And when we decided to shoot this concert in Japan, she was going to be there anyways. We got there, we asked her, “Would you mind doing this?” She was a bit unsure to start with because she wanted to hang out and watch the band and have fun. But after awhile she was persuaded to put the camera on and come along. She’s not an actor and hasn’t taken direction before. Parts of [the film] are just scenes from her night out, or when she goes off into the forest. It’s kind of an interesting mix between the two really.

Yeah, we were wondering if she was an actress. She is very expressive.
She has an amazing face. If we had cast that, I don’t think we could have done any better. I love the bits when you can hear her sort of shouting over top of the music and she’s got a sort of odd accent —it’s half Japanese, but also a cockney accent. But, yeah, it’s her experience of it all. We were very lucky. And you know how, with some of these concert vids, they’re taken over a band doing five nights at the same venue? We didn’t want to do that. We wanted to have a record of this one night. This is the record of this one gig on this one night in a forest in Japan. I think it made it more exciting because there wasn’t a safety net.

How many cameras did you have? Twenty?
Something like that yeah. Adam was handing them out to friends of the band that were going to be in the crowd; people who weren’t trained cameramen or anything. He had proper cameramen and some of the camera crew that were there for the festival, but the crowd is the fan’s camera-view of it.

How much footage did you end up having?
Fifty hours, I think? It drove Adam mad.

You end up seeing it all, though. The audience can see people screaming, you see them crying…
Terror. There’s tears, there’s terror.

It’s great at showing the full range of emotion that can come with dance music in that kind of setting.
Yeah, when we made the decision to film it in Japan, some people were like, “Oh, yeah, well it won’t be like filming it in Brixton or something where you’re gonna get people really raging.” What I liked about the Japanese audience is, as you said, their full range of emotion. It’s not just the, “Ahhhhhhhhhh” of the people raging. The feelings of the music really come through — they’re emotional. There’s puzzlement, and there’s terror, and then there’s joy and ecstasy. All the things that we’ve always wanted to communicate through our music.

What about the inclusion of the more sinister imagery scattered around the festival? We saw a terrifying, roaming clown and projections of roaches…
Adam created hand-held projectors and he took them out into the festival. That scary clown is actually Adam’s dad in clown makeup. About the roaches and those things… I remember when we first saw Adam in the nightclub — other people were projecting laser-beam robots and things and he was projecting these weird, unsettling, earwigs crawling around. You know, weird things you see in a club and you shudder and think, “Oh man, I wish I hadn’t seen that.” But now it’s strange that we’re drawn to it.

What are your personal favorite concert-going experiences?
On the visual side of things, I remember going to a nightclub on Crucifix Lane in Southeast London and it was like real old, old, old world. Near the London dungeons in real old, old London. It’s the kind of place where you imagine mystics and murderers hanging out. Adam was doing visuals over there, it was kind of underground, in ’92 or ’93, I think? I remember going there and they were projecting visuals of ants scurrying around the walls and cockroaches and it was being played out to the most horrific techno-acid music. I liked seeing that as a feeling back then; this sort of unsettling psychedelia being transposed into that sort of world.

What about a live show? Are there any that stand out as far as letting yourself go completely?
I remember a time I went to see Mercury Rev once a long time ago. In one of their earlier incarnations with the full lineup. I remember them lining up at the front of the stage and just blasting — when they had all of the horn players and street players and feedback. They were all standing in a line at the front of the stage and it just felt like you were being hit with waves and waves of sound pouring. I definitely got that feeling that you were being sort of consumed by the music. That’s what you want any time you go to the club on a Saturday night and there’s dry ice and you can’t see your hands and suddenly you’re like, “I’m lost in sound.”