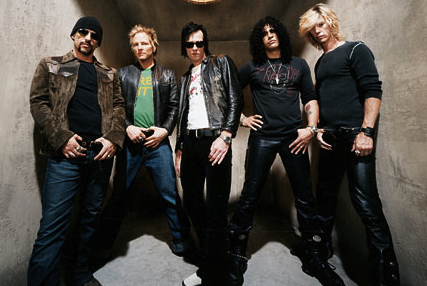 Is Velvet Revolver trying to tell us something? The supergroup played PinkFloyd’s “Wish You Were Here” last night during a one-off, four-song reunionset in Los Angeles, the band’s first performance together since singer Scott Weiland left in2008. While it might be tempting to try to detect a note of Velvet Revival in the choice ofsong, its mournful tribute to a troubled friend was actually wholly appropriate to the event,organized by VR guitarist Dave Kushner in honor of late composer and music supervisorJohn O’Brien.

Held at West Hollywood, California’s House of Blues, “Love You Madly: A Concertfor John O’Brien” benefited the widow of Kushner’s longtime pal O’Brien, who was founddead in a Chicago hotel room last August. A rough fan video from the concert showsWeiland rasping the Rogers Waters-led classic rock ballad backed by Kushner along withformer Guns N’ Roses members Slash, Duff McKagan, and Matt Sorum — Slash’s bluesysolo is the highlight of what appears to have been a fairly straightforward rendition.According to Blabbermouth, the band also performed Velvet Revolveroriginals “Sucker Train Blues,” “She Builds Quick Machines,” and “Slither.”

Pouring further cold water on the idea that Velvet Revolver might wish Weilandwere here to stay is the fact that Pink Floyd covers are such familiar territory forthe group. In fact, they’ve rolled out “Wish You WereHere” many times over the years in live performances. Velvet Revolver’s version ofPink Floyd’s “Money” appeared on the soundtrack to 2003 Mark Wahlberg heist-film remakeThe Italian Job.

Will Weiland’s return to Velvet Revolver end up as more than a one-night stand? It’stoo soon to tell. Kushner told Rolling Stonebefore the show, “I know everyone’s got other commitments, but I think everyone’slike, ‘Let’s get this thing done and get through this and then we’ll see.'” They’re just five lostsouls swimming in a fish bowl.