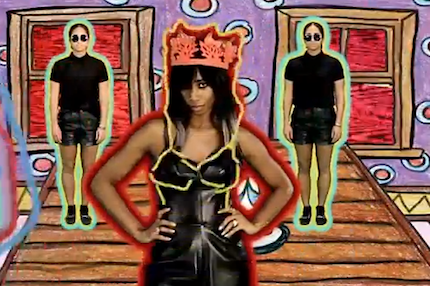 When Santi White released her 2008 debut album Santogold, which was then also the Brooklyn polyglot-pop singer-songwriter’s stage name, her voice gave off a warmth and fragility that was miles way from the more self-consciously avant-garde M.I.A.’s similarly inclined global street-trotting. Reviews of Santigold’s return to the Music Hall of Williamsburg on Monday night have noted her pair of straight-faced, impeccably dressed backup dancers — the New York Times called them “two tough sentries” — but their role was already in place four years ago; back then, their protection felt a lot more urgent. In the video for “Big Mouth,” the first track from Santigold’s upcoming sophomore album Master of My Make Believe, the two guardian androids are back, only by now the artist has had plenty of time to grow into her badass self-invention. Vicki Leekx, ha — today the internet is shut down, didn’t you hear?

The song, which you can download from Santigold’s site for the price of an e-mail address, is a logical extension of Santogold’s aesthetic, which, despite the singer’s long absence hasn’t gone anywhere (newer New Yorkers Friends’ breakout 2011 single “Friend Crush” could almost pass for one of the singer’s own singles). Only this time the vibe seems perhaps as much as South Asian in influence as Caribbean, as Santi skewers a gossipy detractor amid electro squiggles and bare, heavily syncopated beats. The video sets her in a wobbly animated world, one that ranges from the desert to underwater levels to outer space. There’s nowhere to hide, but unless you’re the one who’s been talking, there’s no reason to do so, either.