Rihanna Performing at Grammys With ‘ColdPlay’

Pop star and U.K. rockers likely teaming up for 'Princess of China' on February 12 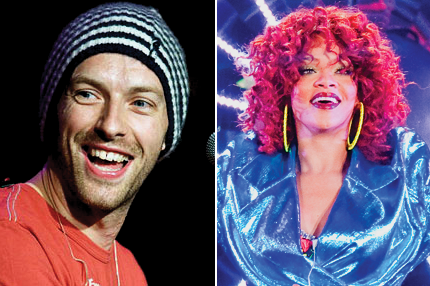 Adele still hasn’t confirmed whether she’ll be performing at February 12’s Grammy Awards — nor have Lady Gaga or Kanye West, for that matter — but Rihanna just told the world she’ll be ending her kushy vacation to play music’s big night. “My friends @ColdPlay and I will be sharing the stage for a performance at this years Annual Grammy Awards! #BONKERS,” she tweeted yesterday. Obviously her little typo bugged whoever runs Chris Martin and Co.’s Twitter, because the band’s retweet corrected the “p” in the band’s name to lowercase.

“I’m competitive with anyone who writes a good song — I don’t care if it’s a band or solo artist or whoever,” Chris Martin told SPIN this past fall. “If ‘Someone Like You’ comes up by Adele, part of my brain loves it and another part is like, ‘Shit. I’ve got to come up with something better than that.’ Even with Rihanna’s new song ‘We Found Love,’ I thought, ‘Well, why the fuck didn’t I think of that?’ It really drives you.” Martin did wind up recruiting Rihanna for Mylo Xyloto’s “Princess of China.”