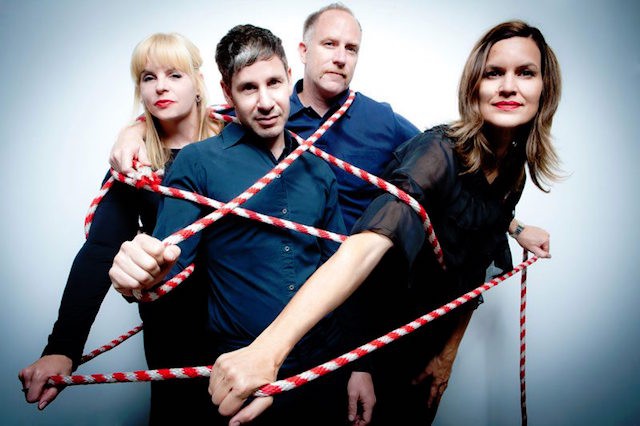 “With a foot on the ground / I can turn it around / Warming up to the sound / And I’m not coming down,” croons Imperial Teen masse over a percolating keyboard riff on their splendid new album, sounding like a veteran quartet with nothing to prove, but still hellbent on proving it anyway. Keeping the alternative-rock fires burning well into adulthood is an enduring conundrum, especially for bands cheeky enough to adopt an adolescent name. But Sonic Youth and Teenage Fanclub still pull it off, and so does this Bay Area crew on Feel the Sound, their first release since 2007. Emphatically so.

One trick is to take your time. This is just the fizzy Bay Area indie-pop ensemble’s fifth studio album in a career old enough to drive in most states, and the subject matter is as grown-up as you’d expect. It’s tempting to interpret the anxiousness invoked here as the manifestation of a midlife crisis, especially in light of the Teen’s last album, The Hair the TV the Baby and the Band, whose title called out each member’s extracurricular pursuits: bassist Jone Stebbins’ hair salon, keyboardist/guitarist Roddy Bottum’s film and TV soundtrack work, drummer Lynn Perko Truell’s offspring, and keyboardist/guitarist Will Schwartz’s side band, Hey Willpower. That album’s most telling song was “Room With a View,” set in the rehearsal space of a band struggling to cope with unsympathetic neighbors while vowing to “do our best to pretend we’ll be 20 for life.”

Feel the Sound does no such pretending, but Imperial Teen still sound as fresh and vital as ever. The band always has radiated an adorable eagerness, which infused even their cattiest barbs with sly wit packaged in chewy pop goodness. But a lot more of those barbs are inward-directed nowadays (“The music’s stopped and I can’t sing / But I can get through anything,” goes the closing verse of “Last to Know”), couched in manic arrangements that exude a sense of the band members feeling dazed and overwhelmed. Song titles include “Over His Head,” “Don’t Know How You Do It,” and “Overtaken,” all rendered in their respective choruses with the greatest of deadpan ease with lovely male-female harmony-vocal chants.

Then again, this is a band that’s always made the most of ambiguity and contrast. First emerging with 1996’s Seasick, Imperial Teen were a genuine curiosity surfing in Kurt Cobain’s wake (indeed, the band’s Faith No More/Sister Double Happiness pedigree has always been one of the least-relevant things about them). They were one of that era’s few indie-rock bands with an overtly gay sensibility, about which they were so disarmingly matter-of-fact that it seemed like the most natural thing in the world. “I never swallow, I chew,” declared that album’s “Butch,” which worked the classic quiet-verse-to-loud-chorus dynamic. Still, they were more inclined toward the Velvet Underground’s drone than Nirvana’s sturm und drang. Seasick opened with a song called “Imperial Teen” that built to a cryptic, tongue-in-cheek chorus that was murmured rather than hollered: “Imperial Teen, 2-3-4-1 / Does it hurt when you scream?”

Sixteen years later, Feel the Sound opens with “Runaway,” featuring a more conventional count-off and new-wave keyboard atmospherics that glide along breathlessly. The sound is so exuberant that it’s easy to miss the lyrics begging for escape from everyone and everything: “I could be you and you’d be me / Go in, go out, go in, go out — yeah!” Self-produced for the first time (this is their first record not helmed by Steven McDonald of Redd Kross), the arrangements are a bit less jingle-jangle and more keyboard-focused, the better to evoke the luscious tones of ’80s Euro-pop (play Love & Rockets’ “So Alive” back to back with this album’s “Hanging About” sometime). For all the angst, the music itself is delectable and loose, with room for high-tension strings on “Don’t Know How You Do It.” A perfectly understated piano hook is the ideal decoration for disturbing, end-times rumination “The Hibernates.”

The passage of time looms large throughout Feel the Sound, as do imminent partings. By the penultimate song, “It’s You,” Imperial Teen almost sound as if they’re bidding farewell: “Too many songs we sang are left unsung / Another dream unwritten, the record’s done.” Maybe so, but this record is killer. And they don’t sound ready to give up just yet.

Review: NAO Fumbles Toward Ecstasy on ‘For All We Know’

Review: Bat for Lashes’ Side Is Always a Bit Lonely on ‘The Bride’

Review: YG Is ‘Still Brazy’ After All These Years