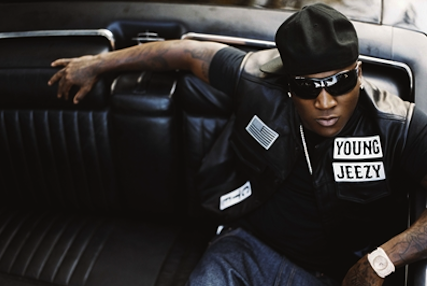 “I came in who I was, and I’m gonna remain that person,” Young Jeezy told us a few years ago. Atlanta’s hip-hop motivational speaker has spent a career trying to balance pop success and street credibility, on one hand delivering mainstream blockbusters like 2008’s The Recession or a guest verse on Usher’s hit “Love in This Club,” and on the other putting out gritty but often less compelling material with his group USDA. The latest Jeezy track making the rounds online falls into the latter camp — hear it here.

Set to appear on USDA’s just-leaked sophomore album The After Party, “Gangsta S—t” finds Jeezy, Boo Rossini, Slick Pulla, and 211 trading casual talk about, um, gangsta shit. “It’s something to ride to,” Jeezy barks at the outset. With generic lines about passing blunts and hitting clubs, Jeezy might as well be in cruise control, but it’s still good to hear his exhortatory drawl once again. And the laid-back production, putting sun-baked horns over drum-machine snare cracks, serves its purpose just fine — it’s something to drive to The After Party to. Now he just has to get to his next solo album.