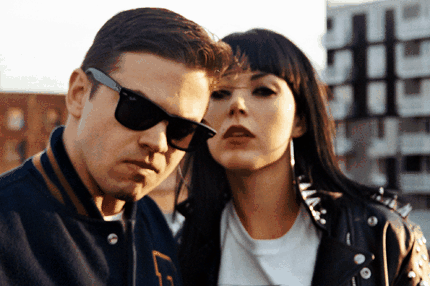 Sleigh Bells are back! The metal-guitar-meets-dance-pop Brooklyn duo announced the existence of their sophomore effort, Reign of Terror, in a trailer posted online early this morning at a new website, ReignOfTerror.tv.

The clip is pretty oblique — it gives no release date yet for the album — but it does suggest that singer Alexis Krauss could have a fallback career as a Bond-film villainess. The main images are of Krauss looking icy cool as she slowly combs her hair in front of retro-Hollywood, lightbulb-framed vanity mirror while wearing an epaulet-adorned military jacket. (Her overall vibe is combo dominatrix-dictator.) The video also features grainy footage of the band rocking out live, engaging in various backstage, in-the-studio, and on-the-van tomfoolery, and of guitarist-producer Derek Miller in the crowd at a football game — all inter-cut with Krauss’ imperiously creepy grooming. Ominous guitar arpeggios provide the soundtrack.

A bold prediction: When the new album drops, it’ll be loud. Watch the trailer below, but catch it in all its HD glory at the Reign of Terror site.