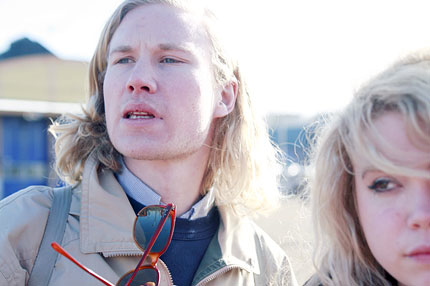 Joakim Benon and Elin Kastlander aren’t the last two people you’d expect to perform a ’60s-style folk protest song — Kanye West and Jay-Z are still on tour, right? — but they might be close. As spacey Swedish duo jj, Benon and Kastlander debuted with a 2009 single comprising two songs with “swag” in the title, put out an album later that year with a blood-splattered pot leaf on the cover, and on last year’s jj n° 3 cut between Titus Andronicus and Lana Del Rey in the Bruce Springsteen-pun sweepstakes by cooing, “Baby, we were born for fun.” They even have a blog filled with posts devoted to not-explicitly-political rappers like A$AP Rocky and Ol’ Dirty Bastard.

The Occupy movement must’ve got to them or something, because now via Swedish music blog PSL comes a video of jj’s Kastlander strumming an acoustic guitar and singing archetypal protest song “Eve of Destruction,” written by P.F. Sloan in 1965 and made famous by Barry McGuire. Rather than a Dylan-like honk, she sings it in her familiar smoky purr — albeit with a touch more stridency — lending a dreamy, unfamiliar aspect to lyrics that might in lesser hands feel painfully worn-out: “Think of all the hate there is in Red China / Then take a look around to Selma, Alabama.” And then, because this is jj, Kastlander quotes the hook from A$AP Rocky single “Demons.”

The performance apparently took place yesterday during a charity event called Musikhjälpen. Watch jj’s surprisingly affecting “Eve of Destruction” cover, plus an unplugged performance of atmospheric jj n° 2 reminiscence “Are You Still in Vallda?” Other clips from the event are here.