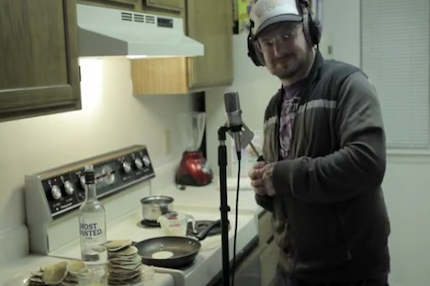 Kansas-raised battle champ and Rhymesayers spitter Mac Lethal (profiled in SPIN’s infamous 2004 “emo-rap” feature) may not have hits like Black Eyed Peas, but he at least has one like Rebecca Black. Uploaded only on Wednesday, white-and-nerdy rapper Mac Lethal’s pancake-themed cover parody of Chris Brown’s tongue-twisting hit “Look at Me Now” has already racked up more than 1 million views on YouTube. As well it should — it’s impressive! Shit, Kreayshawn had about that much when she was signed!

Unlikely enough, this is not Lethal’s only current viral success. Gawker points out that he’s also the author of a Tumblr called Texts From Bennett, a compendium of accidentally ingenious messages from Lethal’s 17-year-old cousin —a Tumblr that also gained renown among internet obsessives in the past 24 hours with a prominent placement on social news website Reddit. It’s like if keyboard cat moonlighted as a lolcat. Amazing. Look at him now: