Ever get the feeling Lady Gaga has some unresolved issues with fame? 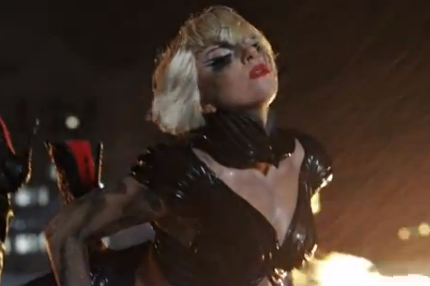 Ever get the feeling Lady Gaga has some unresolved issues with fame? (See: The Fame, The Fame Monster, her aborted Fame Kills tour with Kanye West, everything she has said or done in public for the past three years.) The nearly 14-minute video for her latest Born This Way single, “Marry the Night,” is yet another flop onto the shrink’s couch to examine her favorite topic. If you’re willing to slog through the whole self-directed clip, you’ll eventually see nicely choreographed ’80s-fashion dance sequences, nude Mama Monster grinding in a bathtub, and cars being set on fire.

If you don’t have 14 minutes to devote to a 25-year-old celebrity’s elaborately self-serious origin myth, here’s what you need to know: There’s one instant-classic scene, the one where Gaga writhes around while pouring Cheerios on herself. And there’s a nifty BeDazzler reference. Also: the phrase “morphine princess.” But it’s hard to tell where Gaga is winking at us and where she’s simply fallen into a foxhole of unrestrained ego.

First, there’s an interminable introduction, with one of those cheesy voice-overs from every bad movie ever in which Gaga spouts quasi-profundities like “truthfully the lie of it all is much more honest” and lovingly name-checks people who design things for the 1 percent to wear. This is the part where the singer herself is being rolled out on a gurney and proclaims, “I’m gonna be a star.” Because you gotta be crazy to want fame, or you gotta be crazy to get fame?

When the music finally kicks in, around the nine-minute mark, it’s easy to hear a hit. “Marry the Night” is a perfectly over-the-top dance-pop track about making an everlasting commitment to the nightlife, or, as Eddie Murphy once put it, wanting to “Party All the Time.” It’s catchy, well-sung, and very much of the current Eurotrash-friendly pop moment. You know how sometimes a song like Frank Ocean’s “Novacane” or Drake’s “Marvin Room” comes on in between LMFAO or Taio Cruz on the Top 40 radio station, and reminds you that music without any evident influence from David Guetta can still be popular? This is not one of those songs.

In real life, the artist born Stefani Germanotta has explained how the video is about the day she was dropped from her first label, Island Def Jam. “One of the worst days of my life,” she called it. But she really is a star now! Once you have the fame and resolve how you got it, the next step is simply keeping it… and keeping it from making you crazy.