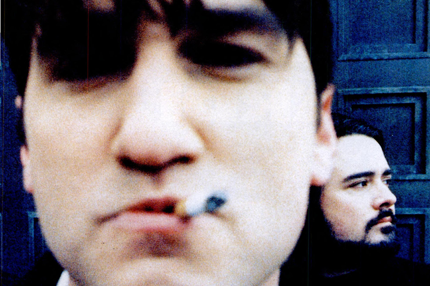 The Afghan Whigs are reuniting for their first shows in 13 years, including both London and New Jersey’s All Tomorrows Parties festivals. To celebrate, SPIN is looking back at our feature on the band that originally ran in our April 1996 issue.

“Any love is good love,” cracks GregDulli, leaning back in the one funkycafe open on this snowy CincinnatiSunday, letting his big face fillup with a mouse-eating grin. Dulli’s got a lot oftorn in him; he has cat eyes, almost orange ina certain light, the type that focus better in thedark. And there’s that smile, the first step ina seduction that’s made the Afghan Whigs’30-year-old leader the kind of dangerousheartthrob who gets bras and panties thrownat him while his band churns through talesof romance gone down a gravel road.

“I stick with the classics,” hedges Dulli, whenprobe a little about the noirish scenarios thatdominate his songs. “Lying, betrayal, lust, hate,decay.” Across from him sits Whigs bassist JohnCurley, 30, a sweetie himself, but more a brotherthan a crush. As we talk about the Whigs’ fourthalbum, Black Love, it becomes clear that none ofus can quite figure Dulli’s metamorphosis fromordinary child with glasses, braces, and allergiesinto grunge’s number one lover man.

Dulli’s a born flirt — he charms his friends, hisfans, even Curley’s Black Labrador. And he’sworked hard to absorb the love lessons of hisfavorite soul slingers. So it comes as no surprisethat Dulli’s idea of a man’s man is one whobelongs to the ladies. “Greg was a mama’s boy,”Curley reveals at one point, and Dulli quicklyagrees. “I’ve had a close friendship with my mothersince I was two years old,” he confesses. “She’sjust very nurturing. I drew comic books, and sheencouraged me. She snuck me into tap-dancinglessons behind my dad’s back. My dad was theMan, but my mom could always get around it.”

Dulli likes to shoot the shit with the boys,talking baseball and burping unapologetically.But he also wants to hang around the girls, learntheir secrets, make them smile. “At some pointwe realized we gladly wanted women to come toour shows,” he says. “How many indie-rock showshave you been to where you’re one of four girls?We want to create a different kind of mood.”

The mood at Ultrasuede, the studio Curleyco-owns, where the Whigs rehearsed andpolished Black Love, is set by the rose glowradiating from the stained-glass skylight in thefoyer. Behind it there’s a little cubbyhole cut intothe wall where, Curley smirks, the space’sformer owners used to hold intimate “auditions.”The room’s tawny wood paneling and red-and-black shag carpet could have been lifted fromthe Ohio Players’ den. Literally: The studio wasonce owned by the Calloway brothers of 70ssoul sensations Midnight Star, and no doubt thecomposers of Honey dropped by on occasion.Bootsy Collins definitely did.

“When we played at First Avenue inMinneapolis [the club featured in Prince’s PurpleRain], it was like a religious pilgrimage,” Curleyrecalls later. “They hadn’t painted over the markwhere Prince stood during filming. We were allwalking up to it, didn’t want to get too close —”

“But I got to stand in it,” Dulli exclaims. “And Ihad them introduce us as the Revolution. Princeis the only person in modern music who wasthe entire package,” he raves on. “When he wasin his prime, he was un-fucking-touchable.”

As we leave the studio, Curley reaches into amammoth safe for a few videos to watch later.”I’ll bet that safe was made in Hamilton, Ohio,”says Dulli. “It’s the safe capital of the world.”a portrait of a rustic riverside cabin adorns thefront of the safe. “It’s a pastoral view of myhouse,” snickers Dulli. “Not really. I grew up ina subdivision. Ordinary tract home. It was onthe river, though.”

It was in Hamilton, a small town 20 milesnorth of Cincinnati, that Dulli first integrated hismusical tastes. “I played a lot of basketball as akid,” he remembers. “For white kids, once you’vemastered the opposition in your neighborhood,you go in search of a better game. And that meantgoing across the river, a quarter mile away. I gothipped to Brick and L.T.D. at my friends’ housesthere, the black music white people didn’t listento. But I liked rock, too. All we’ve tried to do as aband is shove them together.”

The Whigs refined their transgressive soul onthe Sub Pop EP Uptown Avondale, a collectionof R&B covers shot down a black hole. Theywent a giant step further with 1993’s Gentlemen,a 100-proof distillation of cruel romance that isstill alternative rock’s final word on the subject.Black Love takes Gentlemen’s clenched-teethenergy and blows it up into a wail. Drawing fromthe Who and Pink Floyd as well as Stevie Wonder,it’s the furious flip side of the cool soundtrackDulli helped construct for the Ted Demme movieBeautiful Girls, which features the Whigs — Dulli,Curley, guitarist Rick McCollum, and drummerPaul Buchignani — attacking soul classics byBarry White and Frederick Knight. “Black musicis just more openly emotional,” Dulli explains.”It’s the difference between an indie-rock whiteboy whispering something into the microphone,or Teddy Pendergrass coming in and saying,’You got you got you got what I WANT!'”

Dulli knows the moral risks of mining the soulcanon. “As a white person, the minute youacknowledge you like black music you have todefend yourself.” While Black Love’s title clearlycarries an interracial overtone, Dulli’s otherinspirations — Kenneth Anger’s book HollywoodBabylon and the work of ambulance-chasingphotographer Weegee — suggest a broaderstory about the shadowy borders that any urbandweller could end up crossing. “Compulsion isan accurate word to describe the mood I’mlooking for,” admits Dulli. After all, that’s thebeating heart of soul music; beneath thesublime smoothness and the bubbling grooveis hunger.

“I just move around a lot,” explains Dulli,as he tries to describe the wild loop he’s madefrom Cincinnati to points unknown and backagain. Since the mid-’80s, he’s lived in LosAngeles, Phoenix, Minneapolis, and Chicago,and he now splits his time between a rentedhouse in Seattle and a makeshift bed onCurley’s floor. “I don’t know why he moved toSeattle,” laughs Curley’s wife, Michelle. “He’shere most of the time.”

Maybe all that wanderlust is in his blood; hisdad worked for the Baltimore & Ohio Railroad.Dulli, though, doesn’t speak to his fatheranymore. “Not in any horrible, bad way,” hesays. “We just don’t have anything in common,and there’s no sense sticking two people in aroom who bug each other.” The Whigs didrecord the sound of train brakes on the tracksnear Ultrasuede; mixed in with a bit of churchorgan remembered from a Catholic childhood, itbegins and ends Black Love.

But Dulli’s not haunted by Cincinnati, merelytired of it. Seattle offered a change, and changeis his most serious addiction. And though hehates coffee and won’t eat fish, he likes theNorthwest air and the water, and his buddiesfrom Sub Pop. “I’m kind of a hick,” he says. “Ilike being around trees.”

Cincinnati has trees, if not much else. It’s anin-between town where you make your ownexcitement as long as you can, then slip out.Tonight, in the middle of the Blizzard of ’96,Curley decides the fun is on Straight Street — he’s going to ski it. We drive over to the hill,which is indeed straight, and steep; Curley pilesout, adjusts his goggles, and pushes off. Dulliaffectionately watches him slalom downward.”There are three things that make John happy,”he says. “Computers, skiing, and pot.”

As we play ski lift to Curley, Dulli confesses toan unexpected discomfort with the rock-star role.I ask how it felt to become a sex god in the wakeof Gentlemen. “Would you explain that to me?”he huffs. “To this day I’m shocked about that.”

Oh, please, I protest. What about the “Debonair”video, in which you’re transformed into RichardRoundtree? What about Congregation’s “ConjureMe,” with the naked babe plopped in your lap?”We were dating, though.”

Dulli’s songs of seduction and betrayal mightlead a listener to an obvious conclusion: that he’sa womanizer, a player, a dog. But he’s also thekind of goofball who quotes Monty Python, jumpson the hood of your car as you back out thedriveway, and lovingly boasts of having introducedJohn and Michelle. He wants to be everybody’sfavorite. And he usually gets his way.

The day after the snowstorm, I’m stuck inCincinnati, just like Greg Dulli. “It’s 50 degreesin Seattle,” he moans. We talk for a while abouthometowns. Tonight, Dulli will watch collegebasketball with old friends. But soon he’ll begone. “I’m enjoying myself,” he says. An oldsaying I learned from my mother pops into myhead. “Curiosity killed the cat,” I warn.He throws me his wicked grin and replies,with a phrase he might have learned from hisown mother: “Satisfaction brought it back.”