The Afghan Whigs are better now than they’ve ever been. The last decade of the band’s output, 2014’s Do to the Beast and three years later, In Spades, and, now, How Do You Burn?, reflect a streak unmatched by any other period in their storied, 35-year career. Like The Empire Strikes Back, The Afghan Whigs 2.0 is the rare sequel that outshines the original. This success is due in large part to the continual evolution, constant collaboration, and relentless experimentation of singer/songwriter Greg Dulli.

“I really like the now,” Dulli tells SPIN over the phone. “I change so much over a year or two about what gets me off.”

Dulli’s career has been defined by perpetual motion. Musically, he’s never stopped hurtling forward, always searching for what’s new and exciting to him. He’s never really been on trend. Instead, he operates in his own dark, sexy universe. Outside of the Whigs, he’s released five albums with his other band, the Twilight Singers, a collaborative album and EP as the Gutter Twins with Mark Lanegan, and in 2020, Random Desire, his first proper solo album.

“I’m a band guy. I didn’t do that solo record because I had a great need to be a solo artist,” Dulli says with a laugh. “Everybody else had a project going on, so I just created a project for myself.” 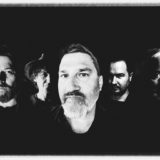 Dulli had scheduled a tour in support of Random Desire but the pandemic had other plans. As soon as the world started shutting down, he realized he had to keep plowing ahead.

“I thought it’s probably best that I move on to the next one as quickly as I can. So that’s what I did,” he said. “Once I realized what I was up against, it’s time to get ready for the next thing. I wouldn’t be talking to you right now if I had not done that.”

Recording during the pandemic presented some obvious challenges. The Afghan Whigs were spread out all over the country and in isolation. Dulli began sketching ideas at home, recording rough demos on his iPhone voice memo app. Then he and drummer Patrick Keeler took them out to producer Christopher Thorn’s (Blind Melon) studio in Joshua Tree. Bassist John Curley contributed his parts from Cincinnati. Guitarist Jon Skibic sent files from New Jersey. Strings player Rick Nelson worked in New Orleans. Sometimes Dulli recorded alone, playing all the instruments himself, like on “Please, Baby, Please” and the stomping anthem “A Line of Shots.”

Other times he called on some of the All Stars from his host of past collaborators. Susan Marshall, whose vocals also appear on 1998’s album 1965, sang on “Catch A Colt.” Marcy Mays (Scrawl) reprised her role from 1993’s “My Curse” to continue that story on “Domino and Jimmy.” And fellow Ohio native Van Hunt, who previously worked on Do to the Beast’s “It Kills,” sang on “Jyja” and “Take Me There.”

“[Hunt’s] two turns really transformed those songs,” said Dulli. “He’s such an underrated artist and such a crucial part of the sound of this record.”

Then there’s Lanegan, a very close friend of Dulli’s, who died earlier this year. His presence can be felt throughout the album, both as a background vocalist and because he gave the record its title: How Do You Burn?

But, despite the loss of Lanegan and the anxiety of the times in which these songs were written and recorded, How Do You Burn? glows with a fierce optimism and defiant hopefulness that is largely new to Dulli’s work. From the opener, “I’ll Make You See God” to the closer “In Flames,” this album is preaching strength and resilience.

And, as for the future, Dulli’s already headed into another Whigs album.“I started working on a song yesterday,” he said. “I had an acoustic guitar and I had an idea and I laid it down on my voice memo and I’m gonna take it out to Joshua Tree on Monday and see where it wants to go.”