It's been a rough couple of days for Tyler and Co. 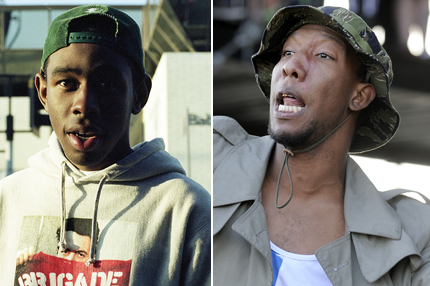 In the past few days, a few members of L.A. collective Odd Future Wolfgang Kill Them All have found themselves entangled in a series of unfortunate situations. We rounded them up for your convenience:

• As reported by the Orlando Sentinel, a crowd of onlookers at the Orlando Tennis Center were “royally punked” late last Friday when OF ringleader Tyler, the Creator and Lionel “Mars” Boyce showed up in Williams sisters drag, with a camera crew in tow. Word had spread that the actual Williams sisters were to make an appearance that day at noon, but when the two “comedians” showed up (Tyler as Venus, Mars as Serena), it became clear that they were only there as part of an elaborate hoax. As audience members voiced their disdain, Tyler and Boyce responded by “barking” obscenities back in their direction. The shoot was reportedly part of their forthcoming sketch comedy series on Comedy Central, Loiter Squad.

• According to Rolling Stone, photographer Amy Harris is pressing charges against Odd Future’s Vyron “Left Brain” Turner after he allegedly slapped her in the face while she was shooting the rap collective’s recent set at the Voodoo Festival in New Orleans. The photographer said in a statement posted on her website that she had been “mulling” a decision while awaiting an apology from the Odd Future camp that never came.

• In a related story published by Under the Radar, Odd Future have been dropped from the New Zealand Big Day Out lineup due to the “hateful nature” of their lyrical content.

• Last night, not 24 hours after performing as a headliner for the very first time in his hometown of New Orleans, nascent R&B figure Frank Ocean canceled his scheduled show at New York’s Bowery Ballroom by way of an announcement posted to his Tumblr. The Village Voice reports that Ocean had “contracted an illness” while in Los Angeles a few days earlier, one for which Ocean, according to said statement, has already received medical treatment. Ocean insists the show is only “postponed” at the moment and that all tickets will be transferred, if not refunded in full. Still, fans are displeased.