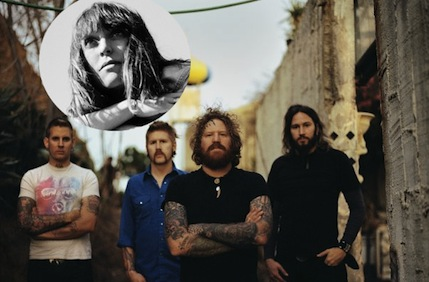 In October, Feist and Mastodon both performed on an episode of the BBC’s chat show Later…. With Jools Holland, part of a pretty remarkable bill of American music that also included Bon Iver. Now, the Canadian singer-songwriter and the Atlanta metal dudes are planning to cover each others’ songs for a split 7″ single single, Mastodon bassist-singer Troy Sanders has revealed to MTV Canada (via Pitchfork).

It’s something of a musical case of beauty and the beast: “The idea is for Mastodon to cover a Feist song and throw some hair and dirt on it, [and Feist will] take a Mastodon song and pretty it up a little bit,” Sanders says. There’s isn’t much time, he acknowledges, but the release would be for the next international Record Store Day. Let’s all mark our calendars for April 21, 2012, then! Feistodon will have to be better than Loutallica, right?