Encore: Get mad, get even 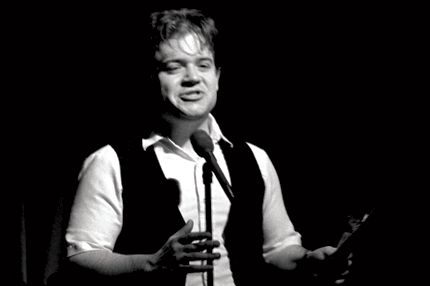 Whew! Wasn’t that a fun read?

Wait, it wasn’t? You’re mad I left out this as-yet-unfamous sketch group, or those amazing, little-viewed YouTube films, or that struggling-in-obscurity comedian? Wait, there’s an unsigned band I’m too clueless to know about and skipped entirely?

Great! Get pissed off!

See that picture? That was me in 1994. Doing stand-up. Somewhere. Royally sucking. Vest, shirt tucked in over my already-pooching belly. Hair by DoucheGel.

There were magazine issues like this one. Rolling Stone and GQ and maybe even SPIN doing “state of funny” issues. I was pissed at who they were focusing on and righteous about me and my friends, all of whom thought we were the cutting edge, being left out.

And I know, as I write this, that the next Louis C.K. and The Office and South Park are somewhere out there, struggling to form themselves. I imagine they’re reading this issue and getting righteously pissed the same way? I did. Good.

And if you’re a fan reading this, go out and find those people.Support them. Buy their self-produced CDs, watch their rough sketch shows, download their YouTube videos. Then, ten years from now, 18 years from now, they can guest-edit this magazine and piss off the next wave.

It’s the fuel of funny. Always has been, always will be.