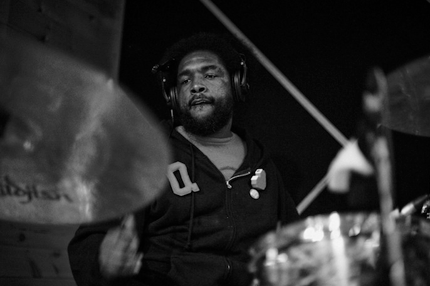 Late Night With Jimmy Fallon house band the Roots agreed to remix the theme song from Captain Morgan’s latest TV commercial, but the Philadelphia-bred hip-hip vets handle “remixes” their own unique way — by completely reinterpreting and re-recording the track. The result? “To Life, Love & Loot,” a spin on the rum company’s tagline that drummer Ahmir “?uestlove” Thompson says is “aggressive, hard, and primitive.” Listen below, exclusively via SPIN.

“They gave us free reign to experiment,” ?uestlove tells SPIN of the track, which was recorded at Manhattan’s Quad Studios. “We scaled the group down to half — it was just drums, guitar, and tuba. The extra surprise is that Tariq [“Black Thought” Trotter] is actually singing on the song.”

?uestlove credits the band’s ability to slip into pirate mode so easily to their gig on Late Night. “Being at Fallon has definitely helped us hone our production and songwriting skills and lift them to another level,” he says. “At Fallon we have to write five and 10-second songs, so you get to the point with the quickness. Seven years ago that would have been an impossible challenge. If you told us, ‘We need you to write a song about life, love, and loot in less than a minute,’ we would have said it was impossible.”

He adds, “The track is part funk, but it’s also as aggressive a song can get with drums, guitar, and tuba. Lyrically, we figured we’d tackle the mission statement line by line. We touch on love and then you extend love to life, and then the love of loot. In this case buried treasure. We definitely had a visual pirate ship in our heads when we were doing this track.”

The Roots’ next full-length disc, undun, is a concept album about a character named Redford Stephens that’s due December 6.