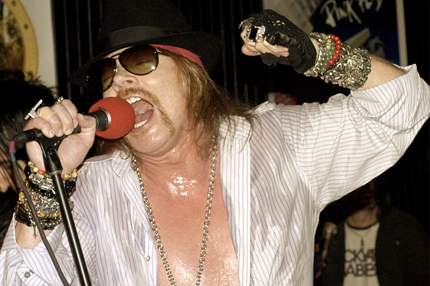 Guns N’ Roses are currently on the road in South America prepping for their first full set of American dates since the release of the epically delayed Chinese Democracy in 2008. Now we kind of get why Axl Rose waited so long to return to U.S. stages — when he leaves the house, unintentionally hilarious things happen (and get captured on video).

In December 2009, Rose was snapped popping a paparazzo in a Los Angeles airport the day he was set to take off for the band’s first dates in Asia. He didn’t look fantastic, and after his reps issued a statement about the incident, Rose made things worse by denying he’d issued the statement.

In the past week alone, Rose has been chided for his appearance and derided for taking the stage two hours late. Then the footage started pouring in.

First, Angry Axl held court in an Argentinian airport, which involved cursing and slamming a car door. Sadly this YouTube footage has been removed by its user, perhaps after Angry Axl sent him a legal notice.

Next, Axl was caught on film in a hotel lobby dishing about his relationship with ex-GN’R guitarist Slash. “It was great ’cause he would pass out and piss his pants and then I would get to be with the girl,” he told fans, always the picture of class.

The third clip is the most slapstick yet, however. Rose slipped in the middle of “Knockin’ on Heaven’s Door” in Mexico City earlier this week and hit the deck (around the :20 mark). Fans responded by throwing things at him, but Axl kept on knockin’ like a pro.