Joan Jett & the Blackhearts, Eric B. & Rakim, and Heart are among other first-timers on the ballot. 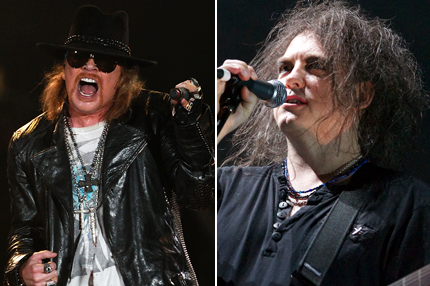 Hard-rock icons Guns N’ Roses are among this year’s batch of first-time nominees to the Rock and Roll Hall of Fame ballot, along with goth-pop forefathers the Cure and hip-hop pioneers Eric B. & Rakim, the organization announced today. Joan Jett & the Blackhearts and Heart also lead the list of first-timers.

Also receiving their first Rock Hall nods are the Small Faces/Faces, the Spinners, Rufus with Chaka Khan, and Freddie King. Also on the ballot are returning nominees Donna Summer, Donovan, Laura Nyro, and War. The winners will be inducted at the ceremony April 14 in Cleveland. The event will be open to the public.

Artists become eligible for nomination 25 years after releasing their first single or album. More than 500 voters will receive ballots allowing them to weigh in on who from this crop of nominees should make it into the Rock Hall.

Guns N’ Roses’ nod comes at a busy time for Axl Rose and his bandmates. GNR recently unveiled a U.S. tour that will kick off on October 28 in Orlando. Check out the latest additions to the tour over at Ticketmaster.

Leading up to the induction ceremony, the Rock Hall has 10 days of festivities planned. Events will include tours of the newly redesigned museum, the launch of what the organization says will be a “major” new exhibit, and the opening of the museum’s new library and archives.