The California garage-poppers release new album tomorrow, and the cut "Bedroom Eyes" has a vision-scrambling video. 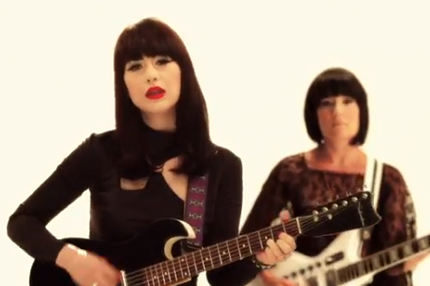 California garage-poppers Dum Dum Girls return with their sophomore full-length, Only in Dreams, due out Tuesday on Sub Pop. Singer-guitarist Kristin “Dee Dee” Gundred and her all-woman band have released the first video from the record, for the yearning pop tune “Bedroom Eyes.”

If “Bedroom Eyes” has at least two meanings in the song — first, a lover’s eyes literally in a bedroom, and second, a lover’s eyes giving that look…– then this vision-scrambling video potentially adds another. The clip segues back and forth between concert-style performance and swirling, vaguely psychedelic interludes that look like we’re seeing the band through a kaleidoscope. Gundred and her band mates perform against a white background in the short black dresses and high heels they’ve also worn during live shows.

As our review says, Only in Dreams puts “the girl group in goth-pop,” and that mix is certainly on display here. “Bedroom Eyes” sets a bouncy rhythm you might expect from Phil Spector beneath wavy, distorted guitars recalling noise-pop bands like the Jesus and Mary Chain. It’s also significantly more polished than debut album I Will Be;the follow-up, again co-produced by Blondie/Go-Go’s hitmaker Richard Gottehrer — joined this time by the Raveonettes’ Sune Rose Wagner — was recorded at Queens of the Stone Age frontman Josh Homme’s Pink Duck Studios.

Dum Dum Girls aren’t Gundred’s only band with a new release. She previously sang and drummed in a group called Grand Ole Party, which released one album before splitting up two years ago. Their sophomore effort, Under Our Skin – recorded with producer Ben H. Allen (Gnarls Barkley, Animal Collective) — finally emerged August 30 via the DH label.