Stream four Daft Punk-style club-wreckers from the superstar DJ's extras disc, featured on his new album 'Nothing But the Beat.' 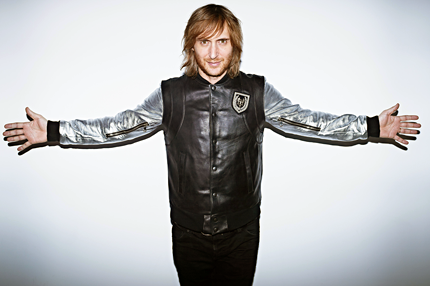 With his 2009 album One Love, French house music DJ David Guetta emerged as one of the biggest party-starters on the planet and has since shaped the sound of much of the pop music you’ve heard blasting from FM radio. He produced hit singles for Rihanna and Black Eyed Peas, revived Kelis’ career by turning her from an R&B singer into a club diva, and collaborated with Kelly Rowland on the inexhaustible “When Love Takes Over” to create a modern-day disco classic.

But tacked onto Guetta’s August 29 album Nothing but the Beat — a 12-track hit parade of monster anthems featuring will.i.am. Nicki Minaj, Lil Wayne, Timbaland, and others –is a bonus disc of club tracks dubbed the Electro album. It finds Guetta returning to his roots, which veer more towards the edgy French house of Daft Punk and Bob Sinclar than fans of his mainstream pop work might expect. (The 43-year-old started out as a teen DJ’ing in Paris clubs and has earned a rep for his F*** Me I’m Famous parties in Ibiza.) SPIN has an exclusive premiere of five tracks from that set; check them out in the player.

Electro’s “Lunar,” which is co-written with Guetta’s pal Afrojack, rocks hard and fast, a confident step into the territory often mined by Daft Punk’s Guy-Manuel de Homem-Christo and Thomas Bangalter. “Paris,” meanwhile, is a dizzying four-minute odyssey that could soundtrack a late-night in the discothèques — or the early-morning scooter ride home along then Seine. Also included is an instrumental version of “Little Bad Girl,” which Guetta’s been rotating into his sets.

Nothing but the Beat is available in stores on August 29. The tracks from the bonus Electro album will be split between the physical set from Best Buy and iTunes, which has “Lunar” available for download now.

We’re sorry, this stream is no longer available.