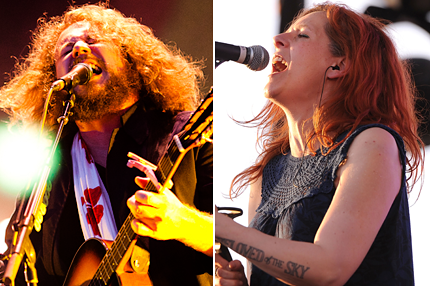 My Morning Jacket have been touring with opener Neko Case in support of their new album Circuital. But Jim James and Co. have invited the singer-songwriter back onstage for some searing covers during their headline sets. They tackled Kenny Rogers and Dolly Parton’s ’80s hit “Islands in the Stream” earlier this month, and last week at a show in Tuscaloosa, AL, they tore through a cover of Stevie Nicks’ 1981 tune “Stop Draggin’ My Heart Around.” Hear the on-stage collab here (via TwentyFourBit).

The track was penned by Tom Petty and the Heartbreakers’ Mike Campbell and featured on Nicks’ first solo album Bella Donna. Case and MMJ don’t mess with the original too much but it’s a blast to hear the red-haired siren and James trade verses as if they were the real Nicks and Petty. A great one.

Hear It: My Morning Jacket and Neko Case, “Stop Draggin’ My Heart Around”