The singer demands an apology from his big brother for comments about the Britpop band's demise. 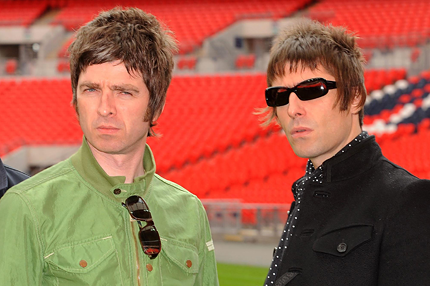 The longstanding feud between Brothers Oasis, Noel and Liam Gallagher, may be heading to court. Liam is suing Noel for comments he made about the demise of the Britpop band, NME reports.

Oasis abruptly split in August 2009 following an altercation between the kin before their headlining appearance at V Festival in Paris. However, the brothers’ stories about that night differ. In a recent press conference, Noel said Liam pulled out of the gig because he was hung over, and added that Oasis’ split was in part due to an argument about Liam’s desire to advertise his clothing company Pretty Green in the band’s tour program. Liam didn’t like those comments one bit.

The rocker, who now fronts Beady Eye, denies Noel’s allegations and is seeking a public apology in England’s High Court, claiming Noel’s comments are a slur on his professionalism.

Liam issued a statement to The Sun, saying…

“I have taken legal action against Noel Gallagher for statements he made claiming Oasis pulled out of the 2009 V Festival Chelmsford gig because I had a hangover. That is a lie and I want Oasis fans and others who were at V to know the truth. I was gutted when I couldn’t play the gig because I didn’t want to let the fans down.

“But the truth is I had laryngitis, which Noel was made fully aware of that morning, diagnosed by a doctor. Noel also falsely stated the demise of Oasis followed a massive row in which he claimed I demanded to advertise my clothing range Pretty Green in the Oasis tour programme [sic]. The truth is there was no such discussion or row between us.

“I am used to being called all sorts of things by Noel and I have in the past said things about him. But what Noel has alleged this time went way beyond rock’n’roll banter and questioned my professionalism. I tried to resolve this amicably but have been left with no choice but legal action. All I want is an apology.”

Noel has yet to respond.