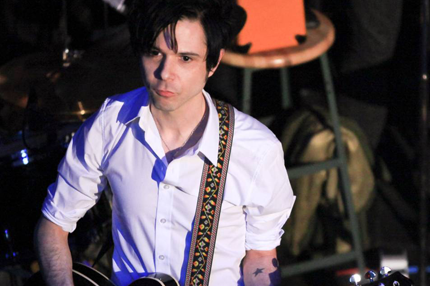 In May, Nick Zinner stepped out of the rock club and into the symphony space. The Yeah Yeah Yeahs guitarist (along with collaborators Hisham Akira Bharoocha and Ben Vida) debuted a sprawling, four-part classical piece titled 41 Strings, which featured a formidable army of guitarists, violinists, and bassists taking on the musician’s first proper attempt at symphonic music. Zinner was commissioned by Loomstate clothing company to do the piece in honor of Earth Day.

Missed the live debut? The Creators Project – Vice and Intel’s partnership, which will be featuring the debut of Karen O’s “psycho-opera” in New York City this fall – were there to compile behind-the-scenes footage of Zinner’s work. Watch that documentary below, and head over to The Creators Project’s site to download audio of the debut.

SPIN caught up with the guitarist to discuss the project.

Why did you take on the project?
I was just excited to try something new, something beyond my understanding and not knowing very much about symphonies.

How long did you guys spend writing the piece?
I spent maybe five weeks. I was writing it all on Logic, using fake instrument sounds. Gillian Rivers, who worked a lot with the Yeah Yeah Yeahs on other projects, helped chart it and arrange all the instruments. I don’t know how to read music.

Was that a benefit or a hindrance?
It was definitely a benefit.

What were some of the biggest challenges writing the score?
Well, for the string players, it was no problem because they’re sight-reading. But it took a lot more time with the guitarists because they just showed up and didn’t learn it. So that took time and patience. We only had two days before the performance to pull it all together. Having said that, everyone was really amazing to work it.

Did you lose your temper like a typically madcap symphony conductor?
No, no, not at all [laughs]. There was no ulterior motive and it was all just for the joy of playing. People coming together and being happy to participate – it’s such an unusual event.

The piece is broken into four sections, dubbed the Four Seasons. Was that influenced by Vivaldi’s classic symphony?
I know about that piece obviously but I couldn’t comment, really. I played violin when I was a kid, and I like a lot of neo-classical minimalists composers, people like Steve Reich and Terry Riley.

How did you source out all the musicians?
I had a few people in mind and Gillian does a lot of work with Brooklyn Academy of Music and she could pull in string players. There were a couple guitar people I knew I wanted. Same with the drummers — Brian [Chase of the YYYs] was one and a heavy Brooklyn collaborator named Ryan Sawyer [of Tall Firs]. We basically pooled from all our friends.

Your parents must have been thrilled to see you taking on classical music.
Yeah, totally! It brought my mother to tears – she was really happy.

Have you thought about taking 41 Strings on the road?
We’re hoping to bring it to other cities – there’s potential. But it was more just about the event and making people happy and doing something that was inspiring and free and unusual and hopefully interesting to other people.

How will this affect your approach to writing rock-oriented music?
It’s all the same thing, I think.

Have you started thinking about the next Yeah Yeah Yeahs record?
We’ve been writing and jamming. We all have side-projects but, yeah, it’s going great so far.