At an intimate club show in California, Billie Joe Armstrong and Co. unveil 15 tracks. Plus: the band offers update on their next album. 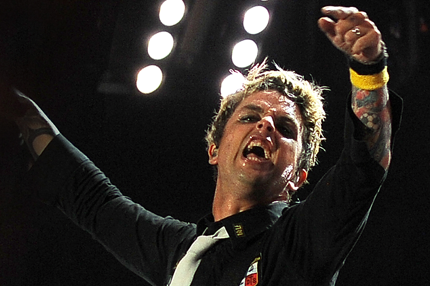 Green Day performed a “secret” show in Costa Mesa, CA, last week – one of the pop-punk group’s tiniest club gigs in years. But lucky fans who managed to squeeze into Tiki Bar were treated to Billie Joe Armstrong and Co. debuting some 15 new songs. Security was strict for the event – no cell phones, cameras, or recording devices were allowed – although a few enterprising fans managed to capture (very muffled) audio of new tracks “Amy” and “Last Gang in Town.” Hear them below, and check out the full setlist here.

As the NME points out, “Amy” is most likely Armstrong’s tribute to Amy Winehouse. He announces that he “just wrote the song last week” and the lyrics (which Green Day posted on their official site) refer to the late British singer: He croons about a troubled girl who walks “away from her drink” and wears “blood stains on your shoes” (Winehouse was photographed wearing bloodied ballet slippers after getting into a fight with ex-husband Blake Fielder-Civil in 2007.)

While “Amy” is a mournful ballad featuring Armstrong solo on acoustic guitar, “Last Gang in Town” is a blitz of a punk tune – and could suggest the sound of the band’s next record. In a thank you note to fans on their website, Green Day said they’re hard at work on their next LP. “We have been jamming and writing new songs for the last few months,” they posted. “It felt great to play these new Green Day songs live and share our ‘work in progress.'”