Queens of the Stone Age’s Oliveri in S.W.A.T. Standoff

The bassist was booked on felony domestic violence charges after a dispute with his girlfriend. 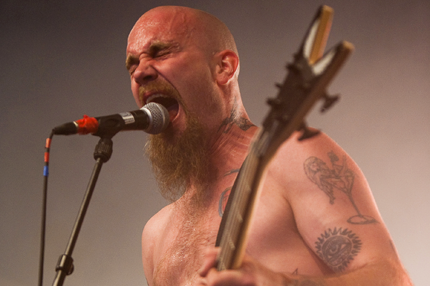 Nick Oliveri, the former bassist for Queens of the Stone Age and current low ender for Kyuss Lives!, was arrested on Tuesday after a five-hour standoff with a S.W.A.T. team at his Hollywood home, the Los Angeles Times reports.

TMZ reports that the incident began with an argument Oliveri and his girlfriend had on Monday, during which the rocker struck her. She left but returned Tuesday to gather her belongings and move out when the two started arguing again. A neighbor called 911 to report a disturbance and the 39-year-old Oliveri locked himself and his girlfriend inside the apartment.

When police arrived Oliveri wouldn’t let his girlfriend leave. A S.W.A.T. Team was called and a standoff ensued until Oliveri released his girlfriend and later gave himself up without incident. The police found a loaded rifle inside the house.

Oliveri was booked on felony domestic violence charges. He was released after posting $100,000 bail.