The frontman shows off his favorite things inside his Toronto study to SPIN's cameras! 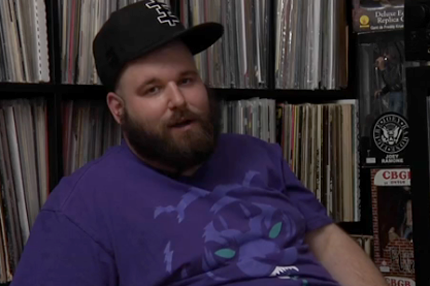 Toronto hardcore hell-raisers Fucked Up have won plaudits ?for their beautifully squalling ?albums and ferocious live shows, which often begin with singer Damian “Pink Eyes” Abraham, 30, shirtless and end with him covered in blood. But at home, he’s a different cat altogether, as we discovered when he invited us inside his study.

Sure, there’s loads of records, demo tapes, and music paraphernalia, but he’s also got kids! And puppies! Watch the video below and get an inside peek at Abraham’s abode.

Fucked Up’s latest release, the (relatively) melodic concept album David Comes to Life (Matador), represents a change of attack — which makes Abraham nervous. “If this record becomes incredibly successful, we’ll say [the sonic shift] was on purpose,” he kids. ?”If not, we’ll claim we intended ?it to be harder.”