Meet two of the new Americana's upstart acts while they toured together in London. 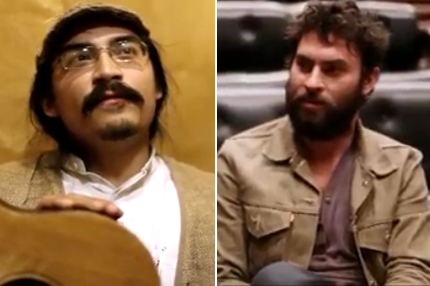 Rhode Island’s the Low Anthem and Seattle’s the Head & the Heart are among the rising stars of indie rock’s Americana movement, and are featured in the June issue of SPIN alongside like-minded bands including the Avett Brothers, the Felice Brothers, and the Civil Wars.

SPIN’s cameras caught up with the Low Anthem and the Head & the Heart while they were touring together in London, to get a peek at their live show and talk about their songwriting.

In their clip, the Low Anthem let us sneak a peek at their intimate, pre-show jam. And bassist Jeff Prystowsky talked about whether genre distinctions are helpful or harmful in describing his music.

Our crew followed the Head & the Heart for some used book shopping and a walk along the Thames, while co-frontmen Josiah Johnson and Jonathan Russell debated the merits of the acoustic guitar.

Get videos like these before anyone else each month in SPIN Play, our iPad app for music discovery. Download it from the App Store today.