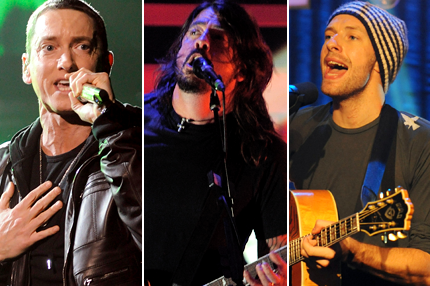 Three of the biggest acts of the past 20 years will headline Lollapalooza’s 20th anniversary festival August 5-7 in Chicago: Eminem, Foo Fighters, and Coldplay top the bill, along with Muse, My Morning Jacket, deadmau5, A Perfect Circle, and over 120 more.

Other heavy hitters in the lineup include Cee Lo Green, Lykke Li, Arctic Monkeys, Bright Eyes, Explosions in the Sky, Death From Above 1979, Big Audio Dynamite, Deftones, the Cars, the Mountain Goats, the Kills, Black Lips, and Cold War Kids.

Festival founder Perry Farrell is once again curating Perry’s, his dance stage, with Girl Talk, Kid Cudi, and Skrillex among the acts booked.

Three-day festival passes are on sale now for $215, in addition to VIP packages and travel packages via lollapalooza.com. Organizers expect up to 240,000 attendees over the weekend.