He may costar in one of TV's smartest comedies, but his rap alter ego Childish Gambino is no laughing matter. 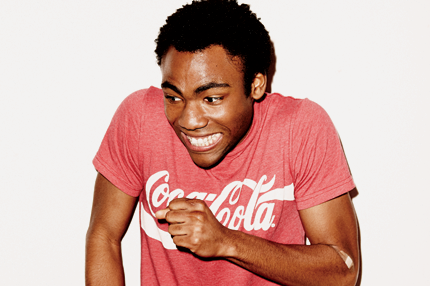 With his sitcom stardom and his Wu-Tang name-generator handle, Donald Glover knows people may have a hard time taking his rap alter ego Childish Gambino seriously. That’s exactly how he likes it. [Magazine Excerpt]

Donald glover admits that he came to rap fandom “like a white kid,” which is to say via Limp Bizkit. But in middle school, he did develop a fixation with teen rap duo Kris Kross, and in homage to their wardrobe, wore a pair of mustard-colored overalls to class one day.

Some kid named Vincent, the bane of Glover’s seventh-grade existence, did not let this opportunity slip by. “He was like, ‘You shit your overalls,'” Glover, 27, recalls from behind the wheel of his BMW 323i, turning off Sunset Boulevard toward a recording studio in Atwater Village. “It’s funny! He’s probably a very successful comedian now.”

Joke’s on Vincent: Glover himself is now the successful comedian. On NBC’s breakout sitcom Community, he plays Troy Barnes, a former high school quarterback struggling to find his identity in a junior college–a neat inverse of Glover’s own arc from schoolyard outcast to multihyphenate wunderkind. Less than five years ago, he and his NYU buds formed the troupe Derrick Comedy, and just after graduation, while working as a dorm RA, he’d parlayed a few viral video skits into a three-year stint writing for 30 Rock and 2009’s Derrick Comedy feature, Mystery Team.

Today, Glover has no idea where Vincent is. But his name and actions recur as a lyrical motif–along with booze, Asian women, Tina Fey, and the fear of failure–that appears in songs by Glover’s rap persona, Childish Gambino. “School bullies like, ‘What the fuck happened?'” Glover yowls over Grizzly Bear’s “Two Weeks” on his 2010 I Am Just a Rapper mixtape. “Nigga off the hook like I fuckin’ shot the captain.”

It’s the comedy side of Glover’s career that bought his modern one-bedroom house in L.A.’s Silver Lake hills. The walls are mostly bare, save for portraits of Powerpuff Girls Blossom, Bubbles, and Buttercup in his living room. “When I bring a girl home, that’s the litmus test,” he explained earlier with a grin. “Whether they can handle little girls on the walls.”

Yes, Glover is a proud nerd, social-misfit status ossified by a childhood spent as a black, Kraftwerk- and No Doubtâ€”loving Jehovah’s Witness in a middle-class white Georgia town full of people who celebrate Christmas. “It was layer after layer of ‘You’re a weirdo,'” he recalls. “They just didn’t have anywhere to put me.” And like many talented weirdos before him, Glover used the alone time to make his own fun.

He has disowned his 2002 album, The Younger I Get, as the too-raw ramblings of what he calls a “decrepit Drake.” He’s feeling a lot better about his recent work: Three Childish Gambino mixtapes have appeared online since 2008, in addition to four of what he considers proper albums, including 2010’s Culdesac; with assistance from Community soundtrack producer Ludwig GÃ¶ransson, he’s backed by arrangements that span indie-rock toddle, lowrider-shaking hip-hop grind, and doo-wop. In March he dropped an untitled EP, and he’s working on a full-length he’d like to release this summer. All have showcased Glover’s fiercely clever, plugged-nose flow, which recalls both Lil Wayne’s verbal skywriting and Kanye West’s vulnerable-braggart defensiveness. And, yes, jokes. But it bears repeating, not just jokes.

Glover thinks his songs, funny though many of them may be, are to winking novelty acts as quirky shows like Community are to middle-of-the-road ratings champs like, well, Two and a Half Men. “Three-camera is old rap, when they tell you when to be scared and when it’s funny,” he says. “Like, ‘Yeah, fucking drugs! Fucking bitches!’ And the comedy rap is like”–his voice jumps an octave to approximate Bill Cosby’s folksy warble–“?’This is about salami!’ But now, there’s an element of single-camera: Is it funny? Laugh if you want.”

Audiences will have to decide when to giggle at Glover’s IAmDonald tour, which concludes the end of this month. The show opens with a stand-up set from Glover before transforming into a Childish Gambino concert, complete with backing band. To prep, Glover studied another young entertainer who bridged music and acting. “I watched Hannah Montana,” he says. “I was like, ‘How did she do that? How did she transition?’ Steve Martin, Jamie Foxx, Eddie Murphy–all these people who do comedy and music, none of them ever did both together.”

Read the complete feature in the May issue of SPIN, available now for the iPad and on newsstands.