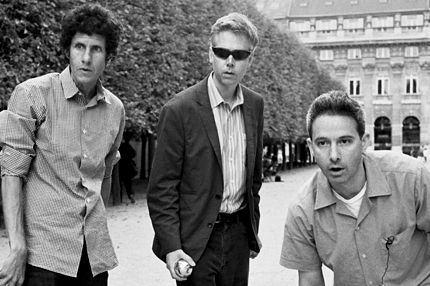 The Beastie Boys’ first track from their May album Hot Sauce Committee Part Two was a throwback to their classic party-starting ’80s sound. But on their second cut, titled “Tadlock’s Glasses,” the New York rap trio go totally avant-garde with the weirdest track to leak yet. The song debuted on the BBC (hear it via Consequence of Sound).

“Tadlock’s Glasses” has an awesomely loose, improvisatory vibe similar to recent albums like 2004’s To the 5 Boroughs and 2007’s The Mix-Up. Mike D, Ad-Rock, and MCA lay down dense clusters of heavily-modulated synths and blippy beats, as the boys speak indecipherable rhymes through all sorts of wild effects.

The Beastie Boys may deliver inscrutable lyrics on this track, but, thankfully, they are planning to roll out a deluxe edition of Hot Sauce, which will help decipher their words, Mike D revealed in his radio interview with the BBC. The expanded edition will include an Wikiepdia-esque “interactive lyrical experience,” which will allow users to click on and explore all of Hot Sauce’s lyrical references. D dubbed it the “Beastipedia.”