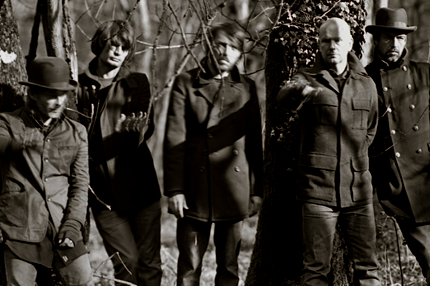 Extra! Extra! Read all about it: Radiohead have published their own newspaper, called The Universal Sigh, to celebrate the physical release of their new album, The Kings of Limbs, out in the U.S. on Tuesday, March 29. The paper — featuring lyrics, stories, artwork, and poems from the band — is available for free today and tomorrow at various locations worldwide.

And while you read your paper, how about a little music? The band supplied SPIN.com with a stream of The King of Limbs, which our reviewer called “a different beast” in his eight-out-of-10 review. “With only eight songs and 37 minutes it’s Radiohead’s shortest album to date. It emphasizes percussion and low end over scrawling guitar and possible singles. The quiet stuff over the loud. More swirl and hum, less grind and growl.”

Frontman Thom Yorke was distributing copies of The Universal Sigh on Monday morning in London. Meanwhile, a New Zealand website, Rip It Up, has already posted a PDF version of the paper.

LISTEN: Radiohead, The Kings of Limbs