The Montreal-born siblings also unveil their plans for the rest of the year. 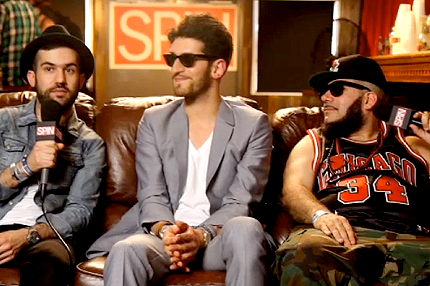 Hip-hop DJ/Fool’s Gold label honcho A-Trak and Dave 1 of electro-funk duo Chromeo may be stars in their respective music communities, but the real-life brothers’ divergent musical careers have only helped boost their fame. “Chromeo got a broader reach in electronic music, and then A-Trak’s stuff went beyond hip-hop, and then we both got reclaimed by the hip-hop community,” Dave 1 told SPIN at SXSW. “Now, it’s kind of become one big scene and we get to play together.”

And while the bros’ paths will cross at Coachella next month, both Chromeo and A-Trak are psyched to spend some time apart this year with their respective projects. A-Trak’s gearing up to put out his second record with Duck Sauce, his collaboration with Armand Van Helden, while Chromeo will continue on the road behind their album Business Casual this summer.

“I just want to keep touring and end this album cycle off gracefully,” says Dave 1. “With a touch of brio and pizzazz.”