The British rockers will release The King of Limbs online this Saturday. 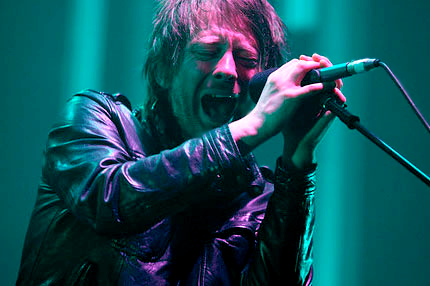 After teasing info about their next record for months, Radiohead have finally unveiled details of the LP. It will be titled The King of Limbs and will be available for download starting Saturday, February 19, the band announced on the official site for the album. Radiohead are putting out the release on their new imprint, Ticker Tape. Check out the artwork below.

Unlike the pay-what-you-want model for their last album In Rainbows, Radiohead are charging fans for the music this time around. The King of Limbs will be available in two formats: a deluxe physical format and download for $48 and an instant download for $9. The digital version will be available on Saturday, while the physical version will ship on May 9.

Radiohead are dubbing the LP “the world’s first Newspaper Album” and the deluxe version comes with two 10-inch vinyl albums, one CD, “many large sheets of artwork, 625 tiny pieces of artwork, and a full-colour piece of oxo-degradeable plastic to hold it all together.”

No tracklist is available, but the band is accepting pre-orders here.

Are you psyched for Radiohead’s new album? Tell us in the comments below.