“I was the only black chick in the inner city singing that in 1972,” she joked. Two minutes later, J Mascis, the bespectacled, long-gray-haired oddball of a frontman for alt-rock amp-busters Dinosaur Jr., plugged in and wailed “Cortez the Killer” so loud it could peel the gold paint from the buttresses, the crushed red velvet from the balcony seats.

That’s Young’s music: it spans race, genre, generation, style , instrument, volume – it knows no boundary. And Thursday’s show was a celebration of Young’s versatile 50-year career, his 34-album catalogue, and the diversity of those who admire it. Now just imagine what those two talked about backstage.

The real treat of the sold-out charity event — which raised over $75,000 for youth music programs, part of a series presented by entrepreneur, philanthropist, and Knitting Factory founder Michael Dorf — was hearing just how this eclectic mix of artists interpreted the music of Young, who did not attend. Some tracks remained true to form, while others were completely refurbished. 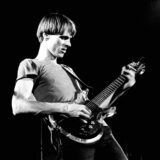 The Roots, pared down to a quartet, transformed “Down by the River” into an R&B/acid-rock freak out with help from Haley Dekle and Amber Coffman, both of Brooklyn’s Dirty Projectors, on backing vocals. Under singer-guitarist “Captain” Kirk Douglas’ command, the loose, long song became even looser and longer, as he wailed a solo through his wah-wah pedal (veering into Hendrix territory). ?uestlove built up, then demolished the song with wild drum fills, and the two girls cooed and shimmied in blue gowns. Those nightly jam sessions on Late Night are paying off, huh?

New Jersey son Pete Yorn had one of the most unlikely triumphs with an acoustic rendition of “Rockin’ in the Free World,” a big rock anthem that, in theory, doesn’t lend itself to acoustic guitar. “I sang this song at a my high school talent show 20 years ago,” he told the sold-out crowd. “Did you win?” shouted a concertgoer. “Pffft. Of course I did,” he replied with a sly smile. He strummed hard and straight, shouting its big refrain. He received one of the loudest ovations of the evening.

Gilberto, who is nominated for a Grammy for her latest album, gave “Harvest Moon” a sensuous, seductive, Latin touch. Her version featured three spanish guitars and a percussionist on a plethora of exotic instruments, including a string of small metal cymbals and a pan of beads that mimicked the sound of rain. “I’m still in love with you,” she sang with a thick accent, over a samba rhythm. “I want to see you dance again.” Are we in Rio?

With the house band, Neville, 70,led a slow grooving R&B version of “Helpless.” He sang with his whole body, lofting for each unbelievably high note, then, just as it seemed like he was about to fall, he’d hit each as his frame writhed and shivered under the intensity. It was a man pouring everything he had into the performance.

Smith, with her daughter Jesse on grand piano, stood at the mic, hands behind her back, and recited “It’s a Dream,” a spare tune of simple emotion from Young’s 2005 album Prairie Wind, which he wrote after his father’s death, with a nod to his own brush with mortality from a brain aneurysm. It’s a song of retrospection and appreciation, with Young revisiting his boyhood in Ontario and celebrating life’s little beauties, like the sound of the birds in the morning, and holding his wife in bed at night. Smith choked up, missing a verse. When she continued, the crowd carried her on their cheers. Now that’s a tribute.

The show closed with a group sing-along, as 30 musicians rocked out to “Hey, Hey, My My.” LaVette shared the mic with Smith and Campbell. Caws with Hatfield, Yorn, and Neville. Glen Hansard, Joan Osborne, and Ben Ottewell of Gomez were on another. Jakob Dylan, the Cowboy Junkies, and DeVotchka rocked out with ?uestlove and the band in the back. But unlike the song’s famous lyric, Young, now 65, isn’t going to burn out, or even fade away. Another verse seems more appropriate: In the hands of other artists, Neil Young, like rock’n’roll itself, will never die.