“This band’s music has always been angular and minimal,” Jamie Hince, guitarist-producer for art-rock duo the Kills, tells SPIN. “But this time the songs took over and grew.”

On Blood Pressures, the band’s fourth album out April 5, Hince and singer Alison Mosshart beefed up their combo of caustic guitars and window-shattering drum machine beats with “instruments we wouldn’t have flirted with in the past,” he says, including piano, Mellotron, and octave pedals. Hince also toyed with a new guitar set-up, playing through seven amps simultaneously. “It’s monstrous. We weren’t worried about keeping that stripped back sound this time.”

Their expanded sound started with the songwriting. Hince and Mosshart — who wrote and recorded together on their past three albums, including their 2008 breakout Midnight Boom — penned tracks separately, a change caused by Mosshart’s responsibilities on the road with the Dead Weather.

“At the start, I was a bit sad about that,” Hince admits. “But as time went on, it was less of a compromise. It freed me up to try a lot of things. Alison would come back from Dead Weather tours with songs she had written in a hotel room on acoustic guitar.” Hince, who produced the LP, would take those songs and play with them in the studio. “It was beautiful because for the first time I was able to do what I wanted. The writing process was a lot more exciting.” 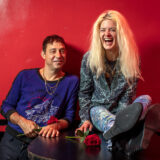 The Kills Are Ready to Roar

Recorded at Key Club Studios in Michigan with Midnight Boom engineers Bill Skibbe and Jessica Ruffins, Blood Pressures is a stylistic leap forward for the Kills. The LP shifts from opener “Future Starts Now,” which features layers of razor-sharp guitars and thundering drums, to “The Last Goodbye,” a tender, vaudeville-style piano ballad with strings and vintage production that makes the song sound like it’s being played on a 1920s phonograph. “Wild Charms,” another departure, is a twinkling lullaby with layers of autoharp, sung solo by Hince (Mosshart typically sings lead, with Hince on backup vocals).

One of the album’s best tracks, the hard-grooving fuzz-bomb “Satellite,” was inspired by a phone conversation between Hince and his girlfriend, supermodel Kate Moss. “I was on tour and the signal kept going. I kept losing her. It turned into a daydream about the universe and vibrations, and how a voice can go from one side of the planet to the other via satellite — and it’s all vibrations. It sounds dreadfully hippiesh [laughs]. But it was a daydream — a nightmare, really — about actually losing someone physically.”

Hince is happy to have Mosshart back from her duties with the Dead Weather and powering forward in new ways: “She was fronting a four-piece rock band with amps stacked to the ceiling, and she’s singing over those guys playing loud. It gave her a completely new and different confidence… and opened her up to feeling like she could see an idea turned into something quite enormous.”