The singer previews first song "Written on the Forehead" from forthcoming February album. 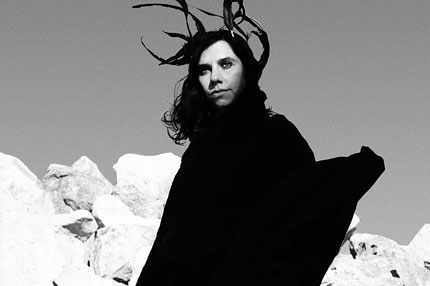 PJ Harvey won’t release her eighth studio album Let England Shake until February 15, but she’s offering a first taste of the record with the stunning new track “Written on the Forehead,” which you can hear below.

“Forehead” — co-produced by Flood (U2, Depeche Mode), longtime collaborator John Parish, and Mick Harvey (Nick Cave & the Bad Seeds) — is a haunting electronic ballad featuring Harvey’s bright, watery vocals and other breezy atmospherics. Harvey also samples what sounds like an Alan Lomax field recording, to which she starts singing along mid-way through: “Let it burn, let it burn, let it burn,” she croons.

Will Harvey go sample-heavy on the new disc? Perhaps. Earlier this year, she debuted the album’s title track on British TV, which features Harvey riffing off the Four Lads’ 1953 single “Istanbul (Not Constantinople).”

Check out the full tracklisting for Let England Shake below:
“Let England Shake”
“The Last Living Rose”
“The Glorious Land”
“The Words That Maketh Murder”
“All and Everyone”
“On Battleship Hill”
“England”
“In the Dark Places”
“Bitter Branches”
“Hanging in the Wire”
“Written on the Forehead”
“The Colour of the Earth”