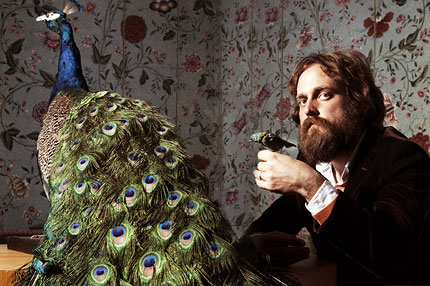 Iron and Wine won’t release their major-label debut Kiss Each Other Clean until early next year, but frontman Sam Beam has offered an early look at the record with the new song “Tree By the River.” Grab it (in exchange for your email address) here.

Back in October, Beam told SPIN the new album was a “focused pop record” and reflected the AM Gold he heard in his youth. “It sounds like the music people heard in their parents’ car growing up,” he says.

He’s right. “Tree By the River” is a nearly four-minute, glossy pop ballad, with snatches of the Carpenters and Fleetwood Mac-style harmonies, jazzy Rhodes keyboards, and folky acoustic guitars. Even Beam, who’s long reveled in Shakespearean-style lyricism, tones down the lit-crit feel in this bittersweet tale of teenage romance. “Mary Ann, do you remember the tree by the river when we were seventeen?” Beam croons. “Happy just to be with you / You were happy for me.”

What do you think of Iron and Wine’s latest song? Sound off in the comments.