Frontman Tim McIlrath talks about the new, apocalyptic material -- and his love for the Dixie Chicks. 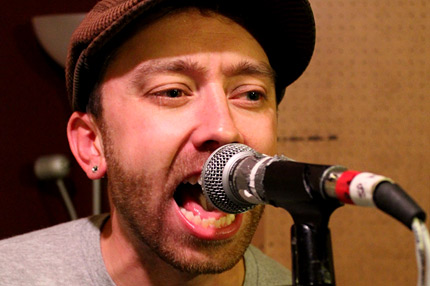 In 2008, Chicago punk group Rise Against released Appeal to Reason, a record that put Bush and his Iraq War policy square within their cross-hairs. It was the group’s most overtly political record to date – and tapped into a populist rage many Americans were feeling at the time. Appeal to Reason bowed at No. 3 on the Billboard chart (the band’s highest debut) and has sold 482,000 copies, according to Nielsen SoundScan.

Rise Against are plotting to top that album with Endgame, due out next Spring. And frontman Tim McIlrath will be tackling an ambitious concept for the disc: the end of humankind as we know it.

“Every day, there’s news about our financial system or the environment collapsing or stories about nuclear proliferation,” McIlrath tells SPIN. “We’re living under this black cloud of doom – everything’s spiraling out of control. The record is about all that.”

Not that that’s necessarily a bad thing: “We’re looking at Endgame from the perspective of, ‘What if this is a good thing? What if this grotesque world we created doesn’t deserve to go on? What if the place on the other of this transition is place we’d all rather be living in?'”

McIlrath may have a grander vision for the band’s music, but they’ve stuck with longtime collaborators Bill Stevenson and Jason Livermore to produce the record in their favorite studio: Fort Collins, CO’s Blasting Room. “It’s so unpretentious and low-key,” says McIlrath of the space. “It’s just a big gray building that says ‘Furniture and Rentals’ on it, and there’s a box truck parked out front that the Descendents used to tour. It’s been sitting there for a million years.”

Of the dozen or so new songs, McIlrath is particularly psyched about the amped-up rocker “Help Is on the Way,” which details the destruction wreaked upon New Orleans after Katrina and the BP oil disaster. McIlrath was inspired to write the song after spending time in the city while the band was on break from touring.

“I was down in those wetlands with a guy talking about how important they were and the damage that was being inflicted on them,” says McIlrath. “And this was right before the oil spill! I could almost visualize a tear coming out of that guy’s eye, like, ‘Are you kidding me? Kicking us while we’re down?'”

McIlrath also adds he got particular inspiration from an unlikely source: the Dixie Chicks, and their song “Not Ready to Make Nice,” which the country group wrote in response to the negative reaction that erupted after singer Natalie Maines insulted then-President Bush, whose foreign policy she disagreed with, at a concert in England.

Like the Chicks, Rise Against have been supported by a major label, Interscope, even when releasing controversial material. “For a band that has always been against popular opinion and been thrown into the world of popular music – it goes without saying our opinions will ruffle feathers,” he says.

“Satellite” is one of those Dixie Chicks-inspired tracks and features McIlrath howling: “We can’t feel the heat until you hold your hand over the flame / You have to cross the line just to know where it lays / You never know your worth until you take a hit / And you won’t find the beat until you lose yourself in it.”

Endgame won’t be a constant barrage of raging punk anthems, however. The band is veering into softer territory on tracks like “Wait for Me.” “It’s one of the slower, more ballad-esque songs on the record,” says McIlrath.

Rise Against have most of the recording done for the album, but McIlrath is hoping to get a couple of guest collaborators when the band mixes the record in Los Angeles in January. “We have a lot of friends in bands and I’m really after getting someone else on the record,” he says. “Hopefully.”