The artist and musician chats with SPIN about her chart-topping remix project and the recent anniversary of John Lennon's death. 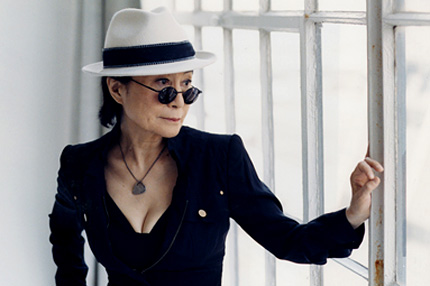 Since the early ’60s, Yoko Ono has been a renegade in the avant-garde art world with her conceptual approach to music, film, art, and politics. Then there’s John Lennon. In the late Beatle, whom she met in 1966 and married in ’69, she found her artistic soul mate — one person, two bodies, they told the world — and, later, she unjustly became the scapegoat for his band’s breakup in 1970.

As we look ahead to December 8, the 30th anniversary of Lennon’s death, Ono is busy. She’s helping the world celebrate his legacy with art installations, TV specials, and all-star concerts revisiting the music of the Plastic Ono Band, featuring Lady Gaga, Iggy Pop, Sonic Youth, and Eric Clapton.

She’s also continuing with her remix project, in which DJs and musicians from Pet Shop Boys to Flaming Lips are reworking tunes from her own catalogue. The collections have dominated the dance charts with the latest, “Wouldnit (I’m a Star),” a track off her 2001 feminist concept album Blueprint for a Sunrise, hitting No. 1.

We rang Ono, who still giggles and speaks with the whimsy of a ’60s flower child, to chat about her latest projects and her late husband.

Hey Yoko! How are you?
I’m good. I’m in London. It’s beautiful today but it’s getting chilly. But it’s a nice kind of chilly [giggles].

I’ve been listening to a lot of your remix releases lately, especially the most recent, “Wouldnit (I’m a Star).” How did you pick these songs?
Well, it started with Pet Shop Boys coming to me and saying, “Can we do ‘Walking on Thin Ice?”’ So it’s usually an artist coming to me and saying, “what about this?” And I’m surprised that they picked “Wouldnit” because it’s kind of a gritty song. But sometimes I suggest a song. The remixes come back afterward and I say, “Well, what about this?” and sometimes suggest a few things, or say, “Oh, can we not do it this way?” But very rarely. All of them [her collaborators] are very good, actually. They are very creative people.

You recently performed a few shows with Iggy Pop, Sonic Youth, Eric Clapton, and others as the Plastic Ono Band to honor John Lennon. How did Lady Gaga get into the mix?
She’s such an angel. It was so nice for her to come down when she’s so busy and everything. Well, she’s always busy and I am too. But, anyways, it’s my show and she didn’t really have to do it. For me, she did something that was really fantastic. She not only came but she said something during the show about how she liked what I was doing.

After she sang a song with me it wasn’t long until it hit YouTube. Many people went on YouTube to see what we did together. The views immediately went up to over 82,000. I was like, “Woah! Woah! Woah!” I just felt like it was an ocean, you know? Just — wow. The waves were coming so strong, like an ocean wave. My songs are too artsy for that kind of thing, I thought. But she’s also an incredible performer; we all know that. But aside from that glitter that she exudes, I think that she’s really a genuine, good musician. I was surprised. Lady Gaga and I understood each other. I felt very warm about the whole thing.

Was that your first time meeting her?
Sort of. We talked so much on the phone first. And I did go to her show in New York. And her show was incredible, you know.

The lineup for those Plastic Ono shows was really quite eclectic.
I know. I didn’t expect that. And of course I wasn’t thinking, “Well now let’s do a show with these big people coming and performing my songs.” No, I didn’t think that way at all. It was my son and his friends that arranged it.

What qualifies a person as a member of the Plastic Ono Band? In the ’70s, you and John said it could be anybody.
Well, the fact that they’re very highly intelligent and a talented singer-songwriter. In the long life that I’ve had as a musician, they’ve became friends and are longtime friends.

Can we expect you to work more with this group?
I don’t know because they’re very, very busy people. They did one [show] and I’m sure that just doing it once was hard. It’s somebody else’s songs and you have to learn to play it and everything. My son and his friends will probably call some other people next time, maybe. But some other people are already starting to say, “Well if you want me, I’m available.” It’s great.

You’ve been working in avant-garde art for over 50 years. Has your approach changed as you’ve gotten older?
Well, I don’t think I’m older. But let’s say that I’m always being myself at that moment; I’m being myself of that moment. [Giggles] Whatever that means.

On 2009’s Between My Head and the Sky, your first album under the Plastic Ono Band name in nearly 40 years, you worked closely with your son Sean.
Oh, yes, it was very good. A friend of mine, the owner of a publishing company, said, “This summer my son wants to work in the office and I love that because we’ll have the chance to talk.” Most the time I felt like that, too. When my son said he wanted to make that record together, I said, “Great, great. Let’s do it.” Because immediately I thought, “Well, that means we’ll be seeing each other more than just a 10 minute phone call.” That’s what most parents think about because kids have their own lives, and we don’t want to really bother them everyday. But I’m already thinking about the next album.

Tell me about the Wish Tree, one of your tributes to John, in which you collect wishes from the public.
It’s derived from an idea I had when I was a little girl and would go to a temple. Before you go to a temple, you see all these bushes covered with white flowers. But when you go near it, you see it’s not white flowers. They’re wishes that people wrote on a piece of paper, then folded and put on the branches. So, you go to a temple and pay $10 or whatever donation you want and they give you this paper that says, “Health. Money. Love,” and you put it on the branches. And I thought, “Well, you know, it would be nice if people would write their own wishes instead of just a printed wish.” So I said, “Well, I’ll do that one.”

And I didn’t think it was going to be so fantastical; it’s like an explosion. I did it first in L.A., briefly in a gallery show. Next I did it in Alicante in Spain. I didn’t think anything of it, really. But then all these people, people who are not used to going to museums, like workers of the city, they all put their wishes on the tree. I said, “Wow, this is beautiful.” My work had crossed a line, so to speak. It’s beautiful. That’s how much people like to make wishes, I suppose.

Then you took the wishes and buried them in and around the Imagine Peace Tower, a monument to Lennon in Iceland.
Yes. I thought of this sort of building made of light back in 1965. At the time I put it down into a conceptual work and sent it to people. Then when I met John, he said, “I want you to put that light tower in my garden.” I was thinking, “Well, I don’t know how to do it, because it’s just this conceptual idea.” I was saying, “Oh, it’s such a pity.” But he was thinking in terms of concrete objects which, you know, it became after all these years. I had just simply forgotten about it.

Then, as the wishes from the Wish Tree were accumulating, someone said, “Well, what are you going to do with the wishes? You are not throwing them away, are you?” I said, “No, no. I’m not going to throw them away.”And then I thought, “Well, what am I going to do with them? Just start accumulating them in storage or something?” So, I figured they’d be perfect to go inside the tower. So when people make wishes, write them down on the paper, and put it on the branch, they know their wish is going to Iceland. It’s beautiful. There are over a million now.

It’s the anniversary of John’s birthday and death this year. Which do you prefer to celebrate?
People concentrate on December 8, the day he died, and feel very sad that he’s gone. But I think they should concentrate on his birthday because it was such a blessing that he was here on this planet, even if it was a short while. He gave us all a lot of power.