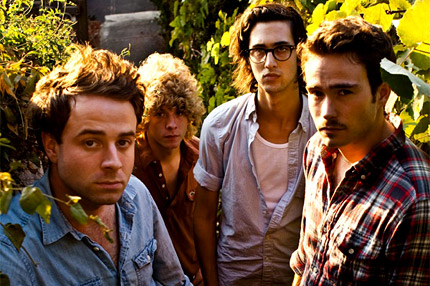 Welcome to the new weekly SPIN.com feature “Name That Band” inwhich we get the inside stories behind the mysterious monikers of some ofour favorite artists. (See past episodes of Name That Band! here.)

Why Dawes: “My friend Blake Mills and I were in a band called Simon Dawes before I was ever in Dawes,” says singer-guitarist Taylor Goldsmith. “It was called Simon Dawes because Simon is Blake’s middle name and Dawes is my middle name. Dawes is also my grandfather’s first name. But after Simon Dawes broke up — I think that was in like 2007 or 2008 — I pretty quickly started playing shows again, but I never had a fixed name for my new band. People who came to the shows were like, ‘Is this Simon Dawes or is this something else?’ Finally, one of the guys who was playing with me at the time said, ‘Just call it Dawes so that fans of Simon Dawes will know that it’s the same guy from that band.’ That seemed like a smart move. I also really liked the idea of keeping the connection to my grandfather. He was such a big part of my musical education. He introduced my brother [Dawes drummer Griffin Goldsmith] and me to Bob Wills and the Texas Playboys and Hank Williams and things like that, which I love. So the name was a combination of paying tribute to him and my crassly wanting to keep any old fans that I had.”

Previously Rejected Names: “Old Shatterhand. That comes from the name of a recurring character in novels by this guy Karl May, who was a German writing about the American frontier. We also thought of using the Traveling Bill Murrays, which was just a jokey name in the vein of Gnarls Barkley.”

Best Band Names Ever: “Gnarls Barkley is so funny and weird. But I love it when names are totally appropriate to the band’s sound. Like, the Band is a good example — they always switched up who was singing lead on the songs, so it’s a very romantic name that suggests all the guys are in it together. There’s no ego in that name. I also always thought Pulp was a good band name. It seemed very fitting for Jarvis Cocker’s songs.”

Worst Band Name Ever: “Wilco and Pavement are awesome, but they have nothing to do with the sound of the bands. I like when the name gives you a clue about the band’s music. The Beatles sucks as a band name. It’s awful. Wonderful band, of course, but unfortunate name.”