The Tennessee quartet rock their adopted hometown of New York City with a tight 22-song set. 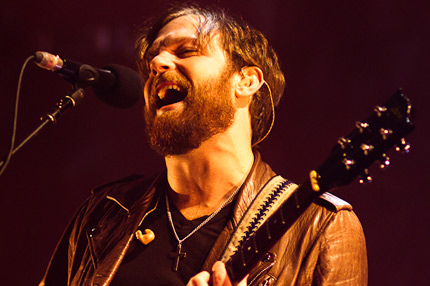 Three fourths of the Followill clan, aka Kings of Leon, have been calling New York City home off and on for a year or so, but Tuesday night they officially moved into their perfect new apartment: Madison Square Garden. The place is just so… them!

“The first time we played here we were the opening band and it was a great night,” singer-guitarist Caleb said midway through the 90-minute show. “But it feels a whole lot better tonight, now that we’ve spent a lot more time in this beautiful city.”

Come Around Sundown, the Nashville-bred quartet’s fifth and latest album, was their first to be recorded in the Big Apple, and Tuesday night the boys threw a huge party in their new digs. Playing 22 songs to a sold-out crowd of nearly 20,000, the band was completely at home in the arena, up to the closing “ohhhhhh whooooaaaaaa ooohhhhhhs” of “Use Somebody,” the biggest hit off their 2008 album Only by the Night.

After massive success overseas, Kings of Leon have claimed the throne as America’s premiere rock band. They have Grammys. They sell out arenas nationwide. They marry models. They make scandals out of pigeon shit.

The quartet offered up 21st-century arena rock at its most unpretentious, unironic, and tightly packaged — big hooks, big production, and all.

The set was peppered with songs from Come Around Sundown. Opener “Mary,” one of their best new tracks, rocked and rolled on a ’70s roadhouse vibe, with Caleb giving a belly-to-the-bar holler and a boastful laugh, as his cousin Matthew Followill played a rip-roarin’ solo.

“The Immortals” started with a wall of guitar reverb that sounded like the intro to R.E.M.’s “Crush with Eyeliner,” then slowed to a big chorus of sparkling guitars.

The oldies fared just as well. Highlights included the throbbing bass distortion of “Crawl” and the soulful ambience of “Revelry,” both off Only by the Night; “Fans,” off 2007’s Because of the Times, with its snare drum that cracked like a reverberating gun shot; and “Molly’s Chambers” and “The Bucket,” loose garage rockers from the band’s first two albums, 2003’s Youth & Young Manhood and 2004’s Aha Shake Heartbreak, respectively.

The boys pimped-out their place for the party. They brought three massive screens that played black-and-white footage of the band in action like a rock’n’roll version of a sports highlights clip, showing Caleb tossing picks to the crowd or drummer Nathan flexing his guns on each snare snap. They had a huge light show, fireworks, and huge plumes of smoke.

“I just want to say how wonderful it is to have my mom here tonight,” Southern gent Caleb beamed, motioning toward her and his fiancée, model Lily Aldrich. “These are the two prettiest women in the room.”

Perhaps the most telling moment of the night was “Manhattan,” a good-times rock-funk groove from Only by the Night. “We dance all night and dance all day / We gonna fuel the fire / We gonna stoke it up,” sang Caleb. “We gonna sip this wine and pass the cup / Gonna show this town how to kiss the stars.”

The Kings showed ‘em indeed — and everyone puckered up for the big smooch.

Setlist:
Mary
Crawl
Molly’s Chambers
Radioactive
Fans
Revelry
The Immortals
The Bucket
The End
Four Kicks
No Money
Notion
Pyro
On Call
Back Down South
Manhattan
Knocked Up
Use Somebody
Closer
Be Somebody
Sex On Fire
Black Thumbnail

More Kings of Leon on SPIN.com:
Check out SPIN’s November 2010 Kings of Leon cover story >>
Read our review of their latest album, Come Around Sundown >>

William Goodman
Tags: kings of leon, We Were There