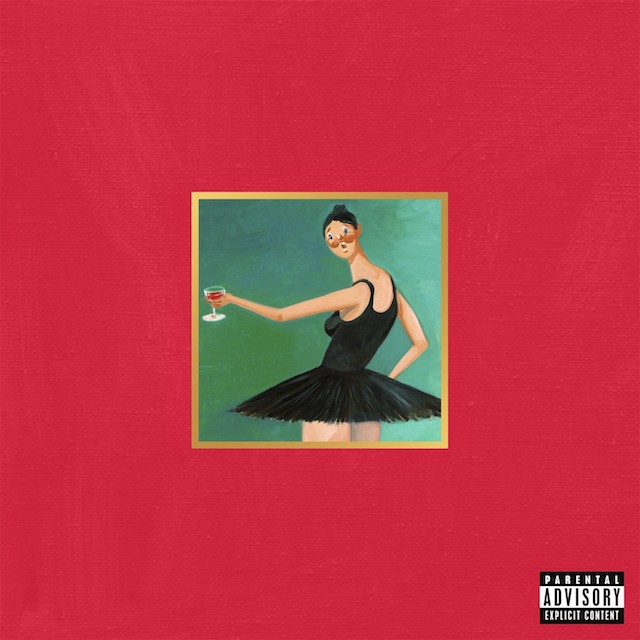 After recording an album-length, Auto-Tuned sigh, Kanye West is ready to celebrate again, but not in the way we’ve come to expect. My Beautiful Dark Twisted Fantasy isn’t idly titled. It’s a sinister, orchestral, hugely grandiose affair that owes as much to the artist’s self-aggrandizing ego as to the voracious id that would destroy it publicly. Exhibit A: West to album cover portraitist George Condo: “Look, I’ma let you finish, but can you make me look even douchier?”

A princely narcissist among narcissists, West has never been afraid to marvel at, pose questions to, or generally bask in the inner folds of his psyche, but there was only one way to interpret the early message sent by “Runaway.” He was calling himself an asshole, in the chorus of an epic, piano-driven, ear-worming single. Fantasy is filled with similar moments, as if West is working from a checklist of his faults. Workaholic. Commitment phobe. Loose cannon. Substance abuser. On “Dark Fantasy,” the album’s beyond luxe opener, he raps: “The plan was to drink until the pain over / But what’s worse, the pain or the hangover? / Fresh air, rolling down the window / Too many Urkels on your team, that’s why your Wins-low.” See what he did there? Loss becomes win.

But West’s rather complex drama — an extrovert’s attempt to invert what’s internal — wouldn’t work so well without an equally complicated score, or with one that simply contrasted his increasingly more nuanced vision-of-self against triumphant bluster. Fantasy’s production is loud and proud, but also poignant and gripping, always hinting at some looming danger. You can hear it in those tempering first moments — wherein Nicki Minaj delivers a cracked fairytale rap over a chorus of angels and demons — and also in the closer, “Who Will Survive in America,” which samples, at length, Gil Scott-Heron speechifying about the death of a nation’s blind idealism (or maybe West’s).

The in-between is just as dark, twisted, and beautiful. There’s “Power,” a contemplation on fame and obsolescence that cleverly quotes King Crimson’s “21st Century Schizoid Man.” There’s “All of the Lights,” wrangling everyone from Elton John to Rihanna to help tell a story about a man whose selfishness drives his family away. There’s “Lost in the World,” which transforms Bon Iver’s melancholic “Woods” into a perversely bright experimental dance track. Fantasy isn’t a flawless album. Too many songs hover around or skate past the six-minute mark. The guest list on posse cuts “Monster” and “So Appalled” could’ve been pared down. West could’ve skipped the three-minute vocoder solo on “Runaway” altogether.

But West isn’t claiming to be flawless anymore. He’s trying to make a masterpiece. Trying to be honest with us. Trying to be honest with himself. Trying to figure out if he’s closer to God or to something else entirely. Far more important than his aim, however, is the fact that he tries at all. The Grammys, the platinum packs, the tickets stub from all the arenas he’s rocked — they aren’t laurels to be rested on. They’re a jagged, unbalanced bed that West could spend a lifetime squirming over, perhaps finding only 60 or so minutes of thorny comfort at a time. That’s eternally daunting news for him. But for us, it’s a blessing.