Watch the band's self-produced, one-take clip for "A Lifeless Ordinary." 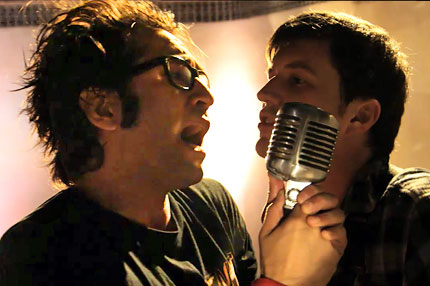 Motion City Soundtrack frontman Justin Pierre had a nagging urge to make his own music video for “A Lifeless Ordinary,” off his band’s 2010 effort My Dinosaur Life — and recently he took advantage of some rare downtime to work on a clever, one-take clip for the song. Watch it below!

It took 19 tries to get it right, Pierre tells SPIN.com – not surprising considering his four bandmates, loads of extras, and a gaggle of dancers all had to coordinate their movements around an empty backyard pool.

“I haven’t had this much fun in long time,” Pierre says of the video, which he worked on with indie director Shane Nelson, “Minneapolis’ best kept secret…. Making this video reaffirmed my belief that you should just trust yourself, and do things you like with people you like. Exactly what I had in my mind came out onscreen.”

As for his inspiration, Pierre cites a trio of influences: “I wanted it to have the coolness and stupidness of Weezer, the absurdity of the Flaming Lips, and the nonchalance of Pavement, like, ‘We really don’t give a shit. It combines all these things that I like, all these little nuggets of ridiculousness.”

Watch the video for “A Lifeless Ordinary” below and tell us what you think in the comments.