Brooklyn indie rap crew's schtick was a bit silly, but they aimed for sonic respectability in NYC. 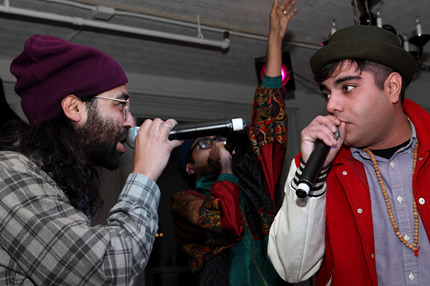 It would have been easy enough for rising Brooklyn rappers Das Racist to ride their breakthrough single, “Combination Taco Bell and Pizza Hut,” to mini-fame — yeah, it’s a mind-numbing gag and an Internet phenomenon, and what better way to comment on mind-numbing corporate omnipresence? — but Himanshu Suri and Victor Vazquez know that’s a one-way ticket to the novelty bin. There’s joke-rap, then there’s good rap that just happens to be funny. You don’t want to be on the wrong side of that line.

The duo, along with their prodigiously mustachioed hypeman Dap, weren’t exactly serious during their five-song set at SPIN’s in-office concert series, SPINhouse Live, presented by Amstel Light Wednesday night, but that doesn’t mean they don’t mean to be taken seriously.

Cameos from Def Jux rapper Despot (on the ’80s New York-romanticizing “Rooftop”) and Def Jux founder El-P (the title track from Das Racist’s recent mixtape Sit Down, Man) were clear signals of intent; they want to be mentioned in the same breath as other hyperverbal, hyperliterate, well-respected independent New York hip-hop artists. Even as they’re on pace to outshine many of them.

It’s true that the hardwood-floored conference room of a magazine’s editorial office might not be acoustically suited to best showcase MCs who specialize in lightning-tongued turns of phrase peppered with far-flung references. (Speaking of pepper: The opening song was comprised of a few bars over Butthole Surfers’ “Pepper.” End strained segue.) Twisty lines like, “You couldn’t see me like a Cuban playing hockey / Cracker in the chocolate, that’s human Pocky / Papa look stocky, mama look chalky / Me, I look a little something like a young Shock G” from the set-closing “Rainbow in the Dark” vanished somewhere around the receptionist’s desk.

But also worth noting: Even though the performance was webcast live, likely to many viewers who’d never experienced Das Racist before, there was no obligatory “Combination Taco Bell and Pizza Hut” appearance. Getting to know these guys is gonna take more work than that, but that work will be rewarded.

More Das Racist on SPIN.com:
Read our review of Das Racist’s newest release, Sit Down, Man >>
Check out Das Racist’s Breaking Out feature in the December 2010 issue of SPIN >>

Steve Kandell
Tags: Das Racist, El-P, We Were There