WATCH: In the Studio with A Perfect Circle

See the alt-rock supergroup rehearse for their upcoming fall tour! 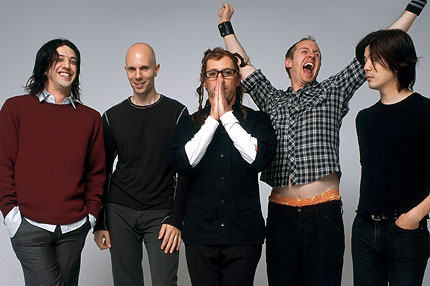 Alt-rock supergroup A Perfect Circle will return this fall with a U.S. tour — and the band has video to prove it!

Singer Maynard James Keenan and Co. are currently rehearsing for their 14-date trek, which kicks off November 4 in Phoenix, and they just posted footage of a jam session filmed in the studio. Watch below!

On the fall tour A Perfect Circle will play their three albums, one each night, in five different cities — Phoenix, Los Angeles, Seattle, San Francisco, and Las Vegas.

The outing, Keenan recently reminded SPIN, is not a “reunion” tour. “[That] would imply we broke up. Which we didn’t,” he said. “So. I’m officially breaking up A Perfect Circle. Now. Let’s get that reunion tour in motion, shall we?”

See complete tour dates here. To read more about Keenan, who has also been spending his time acting and making wine, click here.